The Anna Wintour Costume Center is a wing of the Metropolitan Museum of Art that houses the collection of the Costume Institute. The center is named after Anna Wintour, current editor-in-chief of Vogue, artistic director of Condé Nast, and chair of the museum's annual Met Gala (often called the "Met Ball") since 1995. It was endowed by Lizzie and Jonathan Tisch. As of August 2017, the curator is Andrew Bolton.

The center was formally opened by the First Lady of the United States Michelle Obama on May 5, 2014. Many famous people, such as Sarah Jessica Parker, Diane Von Furstenberg, Tory Burch, Zac Posen, Ralph Lauren, and Donatella Versace, were at the center's opening.

In 1902, wealthy philanthropists Irene and Alice Lewisohn began to volunteer at the Henry Street Settlement House in New York, a community center that provided social services and healthcare to immigrant families. Alice, who acted in plays herself, began working as a drama teacher, while Irene devoted herself to dance productions. In 1914, the sisters bought a lot on the corner of Grand and Pitt Streets and donated it to the Settlement for building a new theater. The Neighborhood Playhouse opened in 1915. By 1920, the theater employed professional actors, and it was known for its experimental productions and its revue "The Grand Street Follies." Theater designer Aline Bernstein served her apprenticeship there from 1915-1924 designing costumes and stage sets.

The Playhouse closed in 1927, but the company continued to produce plays on Broadway under the management of Helen F. Ingersoll. In 1928, with Rita Wallach Morganthau, the Lewisohns established the Neighborhood Playhouse School of the Theatre at East 54th Street, where it became an actor training school and students were offered a two-year program formal drama and dance training to become professionals. 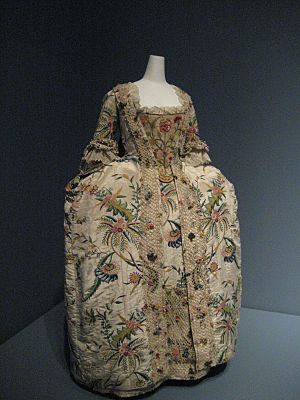 Robe à la française 1740s, as seen in one of the exhibits at the Costume Institute

During their years of running the school theatre and producing plays, a body of knowledge was formed about acting, theater production, and costume, set and stage design. In 1937, Irene Lewisohn opened a home for this library, the Museum of Costume Art, on Fifth Avenue. Aline Bernstein served as the first President and Polaire Weissman as its first Executive Director. After Irene Lewisohn's death in 1944, Lord & Taylor president Dorothy Shaver worked to bring the collection to the Metropolitan Museum of Art. Shaver believed that this would strengthen the American fashion industry and raised $350,000 from New York garment manufacturers to finance the transaction. The Costume Art museum was became part of the Metropolitan Museum of Art in 1946, becoming The Costume Institute but was independently run until 1959 when it became a curatorial department in the museum. The Met is now home to the Irene Lewisohn Costume Reference Library.

Since 1946, with help from the fashion publicist Eleanor Lambert, the institute has hosted the annual Met Gala to raise money for operating expenses.

In 2008, the American Costume Collection of the Brooklyn Museum merged into the Costume Institute, a cost-saving scheme coming after years of close collaboration between the two organizations. The collection of the Brooklyn museum is older, having been formed from private donations by former New York high society personalities, beginning with the donation in 1903 of an 1892 cream crepe dress worn by Kate Mallory Williams at her graduation from Brooklyn Heights Seminary. Prior to the move, 23,500 objects from the Brooklyn collection were digitized and these images are now shared by both organizations. At the time of the merger, the Met costume collection consisted of 31,000 objects from the 17th-century onwards. The opening exhibition in 2014 featured work by British-born designer Charles James, an important figure in New York fashion of the 1940s and 1950s and whose work is in the Brooklyn collection.

All content from Kiddle encyclopedia articles (including the article images and facts) can be freely used under Attribution-ShareAlike license, unless stated otherwise. Cite this article:
Anna Wintour Costume Center Facts for Kids. Kiddle Encyclopedia.