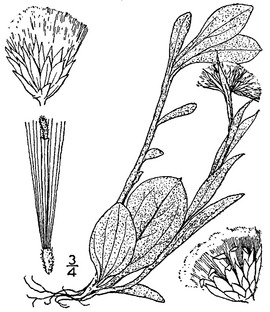 Antennaria plantaginifolia is rarely more than 15 centimeters tall, consisting of a basal rosette, and an erect stem which bears the inflorescence, a tight flat topped cluster of 4 to 17 fuzzy flower heads composed exclusively of disc flowers, with no ray flowers. The basal leaves are petiolate, oval to roundish, 3.5 to 7.5 centimeters long and 1.5 to 3.5 centimeters wide, with 3 to 7 prominent veins. The under side of the leaves is covered in thick silvery hair. Additional leaves along the stem are lanceolate and smaller. The fruit are cypselae with a pappus of white bristles. 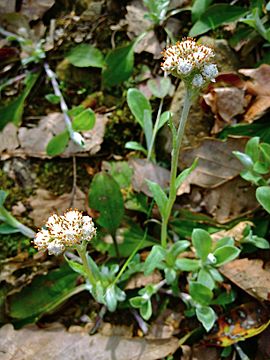 Antennaria plantaginifolia is dioecious, meaning that the male and female flowers are borne on separate plants. It often forms colonies, sometimes consisting entirely of male or female plants. It does so in part through vegetative reproduction. Stolons emerging from the basal rosette take root and develop into new plants.

Antennaria plantaginifolia is widely distributed in the eastern North America from Quebec and Nova Scotia west to Minnesota and south to Mississippi, Arkansas, and Florida, with isolated populations in eastern Texas and Saskatchewan. In Virginia, it grows in habitats including dry forests, barrens, and meadows. The presence of this species is dependent on appropriate habitat, and it may be eliminated from an area by development, changes in land use, or competition with invasive species.

All content from Kiddle encyclopedia articles (including the article images and facts) can be freely used under Attribution-ShareAlike license, unless stated otherwise. Cite this article:
Antennaria plantaginifolia Facts for Kids. Kiddle Encyclopedia.