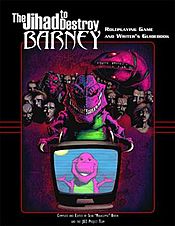 The cover of a roleplaying guidebook The Jihad to Destroy Barney (2006) depicts anti-Barney humor in the 1990s.

Anti-Barney humor is a form of humor that targets the main character Barney the Dinosaur from the children's television series Barney & Friends and singles out the show for criticism.

In University of Chicago professor W. J. T. Mitchell's book The Last Dinosaur Book: The Life and Times of a Cultural Icon, he notes that the program is often a target for parody and negative attacks by children of various ages, adolescents, and adults in the United States and elsewhere; the notion given that the show is "saccharine", "boring", "annoying", "sugary", "dangerous" or "uneducational". For comparison, other popular children's characters such as Thomas the Tank Engine, Dora the Explorer, Bert and Ernie, Elmo, Bali, Peppa Pig, and the Teletubbies have been subject to subversive adult humor; in Barney's case, however, the humor has typically been far more dark and in a more vicious and hostile nature toward Barney. Only Caillou triggers a level of revulsion in audiences comparable to that seen toward Barney.

Charles Barkley was the guest host of Saturday Night Live on September 25, 1993, and performed a skit that parodied his Godzilla-themed Nike commercial by facing off against Barney in a one-on-one matchup.

The animated series Animaniacs produced a satirical episode in which the Warner siblings confront "Baloney", an orange dinosaur meant to be a parody of Barney. The entire episode is dedicated to lampooning the series, as well as PBS for airing it (the introduction promotes the show as part of the "SBS (Stupid Broadcasting Service)" while the voice-over says, "Baloney and Kids is brought to you by this station and other stations that lack clever programming."). The Warners try various methods to get rid of Baloney (including dropping anvils on his head; after the second time Baloney says, "Let's do that again!"), but only escape when the show runs out of time, at which point they also take with them three extremely desperate adult members of the regular crew (including Hello Nurse).[episode needed]

The sitcom Dinosaurs similarly produced a satire episode, featuring "Georgie", another Barney parody that is an orange hippo, who is idolized by Baby Sinclair, much to the irritation of his siblings and his father, Earl Sinclair. In the episode, Baby Sinclair is enjoying watching a videotape featuring Georgie singing his song, "I Hug You" (a thinly veiled parody of Barney's famous "I Love You, You Love Me" song). Before long, the singing enrages Earl until he finally removes the tape and breaks it into pieces, prompting a tantrum from Baby. To make up for this, Earl has to take Baby to Georgie, who is making a live appearance at the nearby mall. However, Earl refuses to do so upon seeing the long line of Georgie's fans, prompting another tantrum from Baby. Desperate to cheer up Baby, Earl dons a costume and imitates Georgie to stop the Baby's cries. Unfortunately, this gets Earl arrested for copyright infringement by Georgie's people and is thrown in jail. While in jail, Earl is visited by Georgie himself, who reveals his intentions to assert his brand on the children and profit from the marketing and merchandising. Earl escapes with the help of Jean-Claude and Brigitte, members of the Parents' Resistance who see Georgie for what he truly is: a money-grabbing, tax evading fraud. With help from his friend and co-worker, Roy Hess, Earl sneaks into Georgie's studio, knocks Georgie out, and goes on TV disguised as Georgie in an attempt to reveal the hippo's intentions. However, before long, the real Georgie comes on stage, and an on-screen brawl ensues between him and Earl. During the fight, Roy finds himself standing before the camera, and begins entertaining the studio audience by singing Brick House. The fight culminates with Earl pinning Georgie against a wall, and just as the former readies to punch out the latter, the latter says "You wouldn't punch out the most beloved character on children's TV..." Earl then looks to the camera and says, "This is for all you parents at home!" before delivering a final blow to the hippo. At the end of the episode, it is reported that Georgie had been arrested for racketeering and tax evasion.[episode needed]

One of the first well known anti-Barney songs was Tony Mason's "Barney's on Fire" (often miscredited to "Weird Al" Yankovic, who denied writing the song). Although Yankovic did not write "Barney's on Fire", he did mention Barney in the lyrics of the parody song "Jurassic Park" ("...I'm afraid those things'll harm me / 'Cause they sure don't act like Barney..."). The music video for "Jurassic Park" also includes Barney's head being bitten off by a Tyrannosaurus, who later coughs up the head after receiving the Heimlich maneuver from a brontosaurus. Comedian Stephen Lynch has gained fame from his "Evil Barney Bus Driver" and "Evil Barney Babysitter" audio skits (among others), which he did for Opie and Anthony in 1997 and which have been commonly posted on the Internet.

An online video created by Ryan Steinhardt in 1998 combines clips from Barney and Friends with the 2Pac single "Hit 'Em Up", designed to give the viewer the impression that Barney and the other characters from the show are rapping. The humor is based on the juxtaposition of the actual song's heavy use of profanity and violent content, as opposed to the regular lessons and content on Barney and Friends.

A small Italian comic book imprint, Parody Press (an imprint of Eternity Comics), released an anthology comic book entitled Kill Barny [sic] in 1994, a collection of short stories and one-page strips depicting the death of the purple dinosaur. Several months later, another issue was released under the name Kill Barny Again!, reprinting most of Kill Barny but with some new material pages and a new cover.

The Mad Magazine fold-in for issue #328 asked, "What Single Goal Has Brought Agreement And Unity Among Vastly Different Groups?" and the image, which featured pairs of opposite people proclaiming their support for the answer, folded into a dead Barney with the word "extinct" on it, and the caption then read "Death to Barney."

A 1994 FoxTrot comic strip features 10-year-old Jason writing a letter to PBS telling them that Barney should be eating the kids after he saw "Jurassic Park" to which his friend Marcus says he would watch the show if that happened.

The science humor magazine Annals of Improbable Research published, in its 1995 January and February issue, a taxonomical article entitled The Taxonomy of Barney that included X-rays of the character's skeleton.

Several works of short fiction have revolved around not only killing Barney, but portraying him as a demonic force to be defeated in an epic tale of good versus evil, including a series of short stories written by Brian Bull, such as the Day of The Barney trilogy about two children who fight the purple dinosaur and free hordes of children from his demonic control, and Batman versus Barney.

Another YouTube video shows Elmo singing his "Elmo's World" song while Barney the Dinosaur singing his "I love you" song. As a result of Elmo's hate for Barney's singing, he shoots him with a shotgun or pistol and afterwards swears at the dead Barney.

The Jihad to Destroy Barney is a fictional jihad that sees itself in the ultimate battle against Barney (spelled B'harne therein) and his followers. It is described as "a heterogeneous organization of people on the Internet dedicated to defamation, humiliation, eradication, killing, and removal of Barney the Purple Dinosaur of the television show Barney & Friends from the airwaves and from every human's life." B'harne is depicted as a purple, scaly lizard-like demon with sharp talons, long teeth and glowing evil red eyes.

References to a Barney "Jihad" were found on Barney-related Usenet newsgroups as early as 1993. The website itself was active as of 1995. Furthermore, Douglass Streusand, a professor of Islamic history at Marine Corps Staff College in Virginia, discovered that the first entry of an Internet search on the term "jihad" referred to Barney.

One of the most widely distributed works of anti-Barney humor appeared in the 2001 book Science Askew, which determined that a phrase describing Barney contained a chronogram of the Book of Revelation's Number of the Beast, 666. Below is the formula of the equation:

Lyons Partnership, owners of the intellectual property rights to Barney & Friends, claimed that some Barney spoofs that employed photos of the character or parody sound files represented trademark and copyright infringement. Lyons' lawyers subsequently demanded that such material be removed from the Internet. Some site owners complied after such threats, but American law establishes parody as a fair use defense against such infringement claims.

Barney vs. The San Diego Chicken

In 1994, comedy sketches of The San Diego Chicken during professional sporting events began to include scenes of the Chicken beating up a dinosaur character. Lyons Partnership began sending letters to Ted Giannoulas, who portrays the Chicken, demanding that he stop the alleged violation of Lyons' rights on the Barney character.

These threats did not stop the mock battles between the Chicken and Barney. On 8 October 1997, Lyons filed lawsuit in Fort Worth, Texas federal district court against Giannoulas, claiming copyright and trademark infringement and further claiming that such performances would confuse children. In his case, Giannoulas cited that the purple dino was a "symbol of what is wrong with our society--an homage, if you will, to all the inane, banal platitudes that we readily accept and thrust unthinkingly upon our children", that his qualities are "insipid and corny", and that he also explains that, in an article posted in a 1997 issue of The New Yorker, he argues that at least some perceive Barney as a "pot-bellied," "sloppily fat" dinosaur who "giggle[s] compulsively in a tone of unequaled feeble-mindedness" and "jiggles his lumpish body like an overripe eggplant." This court agreed with Giannoulas, and ruled against Lyons on 29 July 1998, declaring the sketches to be a parody that did not infringe on the rights of the character that Lyons created.

Lyons appealed this ruling to the Fifth Circuit Court of Appeals, but again lost their case to Giannoulas on July 7, 1999.

As of 29 November  2006 (2006 -11-29)[update], the EFF successfully defended an anti-Barney website from a lawsuit. An article in British publication The Register applauded the victory.

Around 2001, Olympia, Washington-based comedy website CyberCheeze posted a work entitled "150 Ways to Kill the Purple Dinosaur." Lyons threatened legal action in response, and CyberCheeze replied on their site that the threat was "about as intellectual as the purple quivering mass of gyrating goo you call Barney, but that it also is demeaning to everyone that visits our website and reads this worthless attempt and scare tactic."

All content from Kiddle encyclopedia articles (including the article images and facts) can be freely used under Attribution-ShareAlike license, unless stated otherwise. Cite this article:
Anti-Barney humor Facts for Kids. Kiddle Encyclopedia.