The Apprentice Boys of Derry is a Protestant fraternal society with a worldwide membership of over 10,000, founded in 1814 and based in the city of Derry, Northern Ireland. There are clubs and branches in Ulster and elsewhere in Ireland, Scotland, England, Australia and Toronto, Canada. The society aims to commemorate the 1689 Siege of Derry when Catholic James II of England and Ireland and VII of Scotland laid siege to the walled city, which was at the time a Protestant stronghold. Apprentice Boys parades once regularly led to virulent opposition from the city's Irish nationalist majority, but recently a more conciliatory approach has taken place and now the parades are virtually trouble-free. The 2014 'Shutting of the Gates' parade was described as "the biggest in years" and was violence-free.

The siege of Derry began in December 1688 when 13 apprentice boys shut the gates of the city against a regiment of twelve hundred Jacobite soldiers, commanded by the Roman Catholic, Alexander Macdonnell, Earl of Antrim, which was immediately withdrawn. Retaliatory action passed to the Duke of Tyrconnel who assembled a large but poorly ordered Jacobite force commanded by Sir Richard Hamilton to march north against the Ulster Protestants. The deposed King James II, who had travelled from France to Ireland in March, took charge with the aid of two French generals. Arriving at the gates of Derry on 18 April 1689, he was greeted by a cry of "No Surrender!" The siege was lifted on 28 July 1689 (Old Style) when two armed merchant ships, the Mountjoy and the Phoenix, sailed up the River Foyle to breach a timber boom which had been stretched across the river, blocking supplies to the city. The ships' approach was covered against the Jacobite besiegers by cannon fire from the frigate HMS Dartmouth, under Captain (and future Admiral) John Leake. The Mountjoy rammed and broke the barricading boom at Culmore fort and the ships moved in, unloading many tons of food to relieve the siege. Three days later, the besieging forces burned their camps and departed. It was reported that some 4,000 people (about half the population of the city) had died of starvation or injury. Many had been forced to eat dogs, horses and rats. 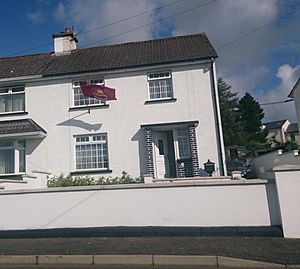 A house in Claudy flying an Apprentice Boys of Derry flag. 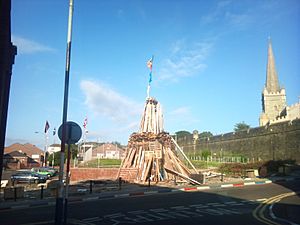 Bonfire in Derry's Fountain estate for the Relief of Derry celebrations 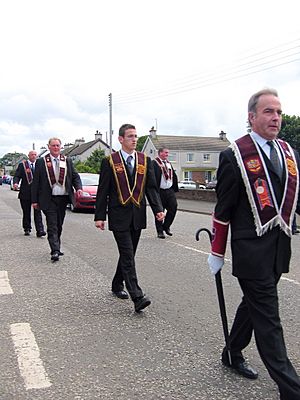 The Apprentice Boys hold two main annual celebrations. These are the 'closing of the gates' on the first Saturday in December, in memory of the action of the original apprentice boys; and the Relief of Derry on the second Saturday in August, in memory of the lifting of the siege. The Relief Parade in Derry is the largest of all the parades in Northern Ireland. In some areas of the city bonfires similar to those held on 11 July are erected and burned. In recent years, it has transformed into the week-long Maiden City Festival in August, and is accompanied by a series of diverse cultural events including bluegrass music festivals, Irish and Ulster Scots music and tuition, arts exhibitions and events staged by other local minority communities such as the Chinese and Polish communities. During the December celebrations it is traditional to burn or hang an effigy of Robert Lundy. Before the Troubles the effigy was often hung from, and then burnt in front of, the pillar commemorating George Walker. This was on the city's walls overlooking the Irish nationalist Bogside area, and was blown up by the Provisional Irish Republican Army in 1973.

According to the Parades Commission, the Apprentice Boys held 231 parades in Northern Ireland in 2007. Of these, 116 were Relief of Derry parades, and 115 were Closing of the Gates parades. The main December parade in Derry was expected to include 1500 marchers and 28 bands, while the main August parade was estimated at 10,000 marchers and 127 bands. In 2009/2010 32 marches took place in Glasgow, Scotland.

History of the associated clubs of the Apprentice Boys of Derry

On 1 August 1714, ex-Governor and siege hero Colonel Mitchelburne hoisted the Crimson Flag on the cathedral steeple and formed the first club known as the Apprentice Boys. The formal arrangements for the August and December commemorations were organised by the military garrison based in Derry.

In the late eighteenth century, Roman Catholic clergy joined in the prayer services offered on the walls of Derry, and in the early nineteenth century Catholics joined the celebrations with their Protestant fellow-citizens. However, the British government's Londonderry Riot Inquiry of 1869 found that "the character of the demonstrations (by the Apprentice Boys) has certainly undergone a change, and, among the Catholic lower classes at least, they are now regarded with the most hostile feelings". The inquiry recommended that both Apprentice Boys parades be banned. For similar reasons they also recommended the banning of Orange Order parades.

The Apprentice Boys role in the celebrations became more important in the early nineteenth century which saw the establishment of the Apprentice Boys of Derry Club in 1814 and the No Surrender Club in 1824. New clubs were formed over the following years, leading to eight parent clubs: Apprentice Boys; Walker; Mitchelburne; No Surrender; Browning; Baker; Campsie; and Murray. In December 1861 the various clubs agreed to associate together under a governing body known as the General Committee. This remains the governing body of the association, each of the eight clubs sending an equal number of representatives, together with delegates of various amalgamated committees around the UK.

In 1865, the local Conservative MP, Lord Claud John Hamilton, won control of the Apprentice Boys and rallied the organisation against the campaign to disestablish the Anglican Church of Ireland, much to the dismay of many Presbyterian members (see also Irish Church Act 1869).

The celebrations continued in the usual form with the firing of the siege cannons (today a small replica is used), the ringing of the cathedral bells, the hoisting of the Crimson Flags, and the laying of wreaths in memory of those who sacrificed their lives. In December they continue with the burning of an effigy of Robert Lundy (the Governor of Derry who had wished to negotiate with King James during the siege) and the service of thanksgiving in St Columb's Cathedral.

In 1969, the Apprentice Boys' parade around the walls of Derry sparked three days of intensive rioting in the city, known as the Battle of the Bogside. The disturbances are regarded by some as the start of the Troubles.

In 1986, the banning of an Apprentice Boys parade in Portadown led to rioting between supporters and the Royal Ulster Constabulary. During these disturbances Keith White became the first Protestant to be killed by a plastic bullet in the Troubles.

In 1990, the organisation decided to apply for funding from the newly established International Fund for Ireland, which led to protests by Ulster loyalists at its August parade. Ian Paisley addressed a rally at the courthouse where he told the crowd that the proposed grant was "a bribe to get Protestant people involved in the Anglo-Irish Agreement."

Plans for the 81-foot (25 m) high Walker Memorial Pillar were completed in 1826. After the completion of the pillar it played a central role in the celebrations. In 1832 the first occasion of the burning of the effigy of Colonel Lundy occurred, the Scottish Protestant Governor during the early part of the siege. The pillar was destroyed by an IRA bomb in 1973. The memorial plinth was restored for the three hundredth anniversary of the siege. The Apprentice Boys placed the retrieved statue in a newly constructed memorial garden beside the Apprentice Boys Memorial Hall. 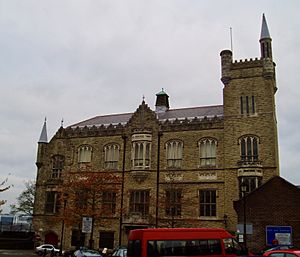 It now houses the headquarters of the association, with its office and debating chamber. All new members are initiated in the hall. Other organisations such as the Orange Order and Royal Black Preceptory have separate accommodations in the hall. It also houses a social club and a museum. The hall is usually open to the public during the summer months, July to September. It has received in 2012 funding from the European Union to create a new visitors centre.

Members can only be initiated within the city walls. The wearing of crimson collarettes by members recalls the crimson flag flown from the cathedral during the siege. Membership is limited to Protestant men.

All content from Kiddle encyclopedia articles (including the article images and facts) can be freely used under Attribution-ShareAlike license, unless stated otherwise. Cite this article:
Apprentice Boys of Derry Facts for Kids. Kiddle Encyclopedia.