Arcata Wastewater Treatment Plant and Wildlife Sanctuary is an innovative sewer management system employed by the city of Arcata, California.

A series of oxidation ponds, treatment wetlands and enhancement marshes are used to filter sewage waste. The marshes also serve as a wildlife refuge, and are on the Pacific Flyway. The Arcata Marsh is a popular destination for birders. The marsh has been awarded the Innovations in Government award from the Ford Foundation/Harvard University Kennedy School of Government. Numerous holding pools in the marsh, called "lakes," are named after donors and citizens who helped start the marsh project, including Humboldt State University professors George Allen and Robert A. Gearheart who were instrumental in the creation of the Arcata Marsh. In 1969 Allen also started an aquaculture project at the marsh to raise salmonids in mixtures of sea water and partially treated wastewater. Despite being effectively a sewer, the series of open-air lakes do not smell, and are a popular destination for birdwatching, cycling and jogging. 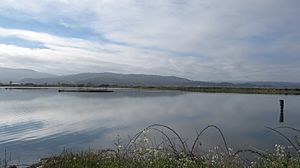 Wetland plants use the energy of sunlight to produce five to ten times as much carbohydrate biomass per acre as a wheat field. Detritus from decomposing wetlands vegetation forms the base of a food chain for aquatic organisms, birds and mammals. Individuals who value wetland environments may not realize the effluent characteristics necessary for release of treated wastewater to Humboldt Bay. Although there is no evidence of harm to wildlife, some regulators suggest potential risk to wildlife using treatment wetlands because of an absence of significant research on wildlife exposure to partially treated effluent and to potential accumulation of chemicals being removed from effluent in wetland treatment processes. Ongoing research at Humboldt State University minimizes potential risk to Humboldt Bay wetlands and wildlife.

The City of Arcata generates an average volume of 2.3 million US gallons (8,700 m3) of sewage per day. Winter rainfall onto the large surface area of treatment ponds and marshes increases the volume of effluent discharged from the wetland treatment system to as much as 16.5 million US gallons (62,000 m3) per day. National Pollutant Discharge Elimination System regulations require monthly average effluent concentrations of biochemical oxygen demand and of total suspended solids to be no greater than 30 mg/L, with an additional requirement for removal of 85 percent of the quantities measured in untreated sewage from the City of Arcata. Unfortunately, when measuring concentrations leaving treatment wetlands, neither of these analytical methods can distinguish between unremoved conventional pollutants originally arriving in sewage, or detritus of decomposing wetland vegetation; so the limitations may apply to the sum of both.

The Friends of the Arcata Marsh (FOAM) operate the Arcata Marsh Interpretive Center that contains exhibits about the operations of the treatment plant, the importance of the marsh, and about the plants and animals that live there. Volunteer docents give tours of the marsh. Education programs are offered for school, scout and other groups, as well as summer camp programs.

All content from Kiddle encyclopedia articles (including the article images and facts) can be freely used under Attribution-ShareAlike license, unless stated otherwise. Cite this article:
Arcata Wastewater Treatment Plant and Wildlife Sanctuary Facts for Kids. Kiddle Encyclopedia.