The Ardèche (Occitan: Ardecha) is a 125-kilometre (78 mi) long river in south-central France, a right-bank tributary of the River Rhône. The river gives its name to the French department of Ardèche.

Its average yearly discharge (volume of water which passes through a section of the river per unit of time) is 64.8 cubic metres per second at Saint-Martin-d'Ardèche in the Gard department.

The Ardèche river starts in the Massif Central, within the Parc naturel régional des Monts d'Ardèche ("Regional nature park Mountains of Ardèche"), in the commune of Astet (Ardèche department), at an elevation of about 1,430 m (4,692 ft).

It then flows roughly to the southwest and, after the towns of Aubenas and Ruoms, it gets into its famous gorge (or canyon) below Vallon-Pont-d’Arc.

The valley of the Ardèche is very scenic, in particular a 30-kilometre (19 mi) section known as the Ardèche Gorges (or the Canyon of Ardèche). The walls of the river here are limestone cliffs up to 300 metres (980 ft) high. A kayak and camping trip down the gorge is not technically difficult and is very popular in the summer. The most famous feature is a natural 60-metre (200 ft) stone arch across the river known as the Pont d'Arc.

Finally, the river flows into the Rhône river, on the right side, near the commune Pont-Saint-Esprit, Gard department.

The Ardèche passes through the following regions, departments and communes: 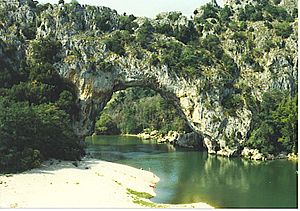 The Pont d'Arc over the Ardèche river

The main tributaries of the Durance river are:

All content from Kiddle encyclopedia articles (including the article images and facts) can be freely used under Attribution-ShareAlike license, unless stated otherwise. Cite this article:
Ardèche (river) Facts for Kids. Kiddle Encyclopedia.