Arland Richard Bruce III (born November 23, 1977) is a former Canadian football wide receiver. He is a two-time Grey Cup champion, having won in 2004 with the Toronto Argonauts and in 2011 with the Lions. He has played 10 seasons in the CFL with the Winnipeg Blue Bombers, Toronto Argonauts, Hamilton Tiger-Cats and BC Lions. During the 2011 season, he became the 14th CFL receiver to record over 10,000 yards receiving in a career.

Bruce attended Olathe North High School in Olathe, Kansas, and was a letterman in football. As a senior, he was a BlueChip Illustrated Top-100 pick, the Kansas State Player of the Year, and finished the year with 1,696 rushing yards. Bruce finished his high school career with more than 3,000 rushing yards and 50 touchdowns.

Bruce played college football for the University of Minnesota. As a senior, he helped lead his team to an 8-3 record and a Sun Bowl berth.

On April 19, 2000, Bruce was signed by the Kansas City Chiefs only to be cut by the team later on.

On May 1, 2001, Bruce joined the CFL's Winnipeg Blue Bombers where he got his first opportunity as a professional to receive significant playing time, playing in all 18 regular season games. In his rookie season, Bruce had 818 receiving yards with 7 touchdowns. His team went on to play in the Grey Cup championship, only to lose to the Calgary Stampeders.

In 2003, Bruce returned to the U.S. to try his luck once more with the NFL. On March 3 of that year, he signed with the San Francisco 49ers where he spent much of his playing time on special teams.

In 2004, after being released by the 49ers following their training camp, Bruce returned to the CFL with the Toronto Argonauts, signing with them on September 3, more than halfway through the CFL season and just shortly before their Labour Day Classic game against the Hamilton Tiger-Cats in which he played. For the remaining seven games in the regular season, Bruce had 247 receiving yards with just one touchdown. In addition to playing receiver, Bruce also served as one of two kick returners on the team alongside incumbent Bashir Levingston. In that role, Bruce returned two kick returns for touchdowns that season. In the East Division final, Bruce led all receivers with 12 receptions for 101 yards, and returned a kickoff 97 yards for a touchdown in the first quarter, helping the Argonauts advance to the Grey Cup championship that year. In the big game, the kick returning threat of both Bruce & Levingston induced the opposing BC Lions to punt the ball out of bounds for much of the game to neutralize the threat. In addition, Bruce was once again a go to receiver amassing 79 yards on 5 receptions. Bruce and the Argos went on to win the Grey Cup. 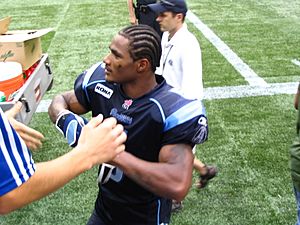 Arland Bruce III in 2005 at Rogers Centre in Toronto, Ontario.

In 2005, Bruce established himself as the Argonauts top receiver with 1205 receiving yards and 11 touchdowns. In that same year, Bruce was named an East division all-star marking the first time in his CFL career he had ever been named to an all-star team.

In 2008, after acquiring a touchdown against the Hamilton Tiger-Cats, Bruce was fined an undisclosed amount by the CFL for donning a Spider-Man mask during his touchdown celebration.

In 2009, he received two objectionable conduct penalties and an undisclosed fine from the CFL for a touchdown celebration against the Tiger-Cats on July 1, in which he removed his helmet, jersey, and shoulder pads, and laid down in the end zone in what he said was a tribute to the recently deceased pop star, Michael Jackson. The Argonauts publicly supported the fine and disciplined Bruce additionally and he apologized to teammates at a team meeting the following day. Head coach Bart Andrus took some responsibility on himself, however, noting that, "I made the mistake of telling him in camp that once he got to the end zone I didn't care what he did but he's straight with it now and I think next time around he will celebrate in an appropriate manner."

In July 2011, Bruce declared his intention to change his name to "Runako Reth".

On August 3, 2011, Bruce was traded to the BC Lions in exchange for a third-round draft pick in the 2012 CFL Draft and an additional conditional draft pick in the 2013 CFL Draft. Bruce had a productive season with the Lions, recording 49 catches for 755 yards and eight touchdowns in 12 games. In the 99th Grey Cup game against the Winnipeg Blue Bombers, he had 73 yards receiving and a touchdown and won his second championship. During the following off-season, he signed a contract extension with the Lions. On January 18, 2013, Bruce was released by the BC Lions.

On January 21, 2013, Bruce signed with the Montreal Alouettes of the Canadian Football League. Arland Bruce had a respectable 2013 season with the Alouettes. He contributed 64 pass receptions, his most since 2010, for 851 yards with 5 touchdowns. In February 2014, Bruce was fined an undisclosed amount by the CFL following his Instagram post in which he told openly gay NFL prospect Michael Sam to, "get on his knees and submit to God fully". Bruce was released by the Alouettes in late February. Bruce's high salary along with the belief that new head coach Tom Higgins would start two Canadian wide receivers were cited as the reasons for his dismissal.

All content from Kiddle encyclopedia articles (including the article images and facts) can be freely used under Attribution-ShareAlike license, unless stated otherwise. Cite this article:
Arland Bruce III Facts for Kids. Kiddle Encyclopedia.