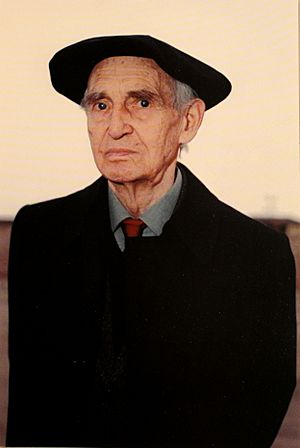 Armin T. Wegner (October 16 1886 – May 17 1978) was a soldier in World War I, a writer and a co-creator of German Expressionism, a political activist for Armenian and Jewish human rights, and a victim of Nazi persecution.

He was a war reporter for several German newspapers at the same time. While staying in Turkey, he saw the genocide of Armenians with his own eyes.

After Hitler came to power, Wegner was against the fascists, and spoke against the treatment of Jews. After writing a letter to Hitler, he was arrested and tortured. Wegner survived and escaped and was based in England, and in Italy after the end of World War II.

All content from Kiddle encyclopedia articles (including the article images and facts) can be freely used under Attribution-ShareAlike license, unless stated otherwise. Cite this article:
Armin T. Wegner Facts for Kids. Kiddle Encyclopedia.