Arnulf I, Count of Flanders facts for kids 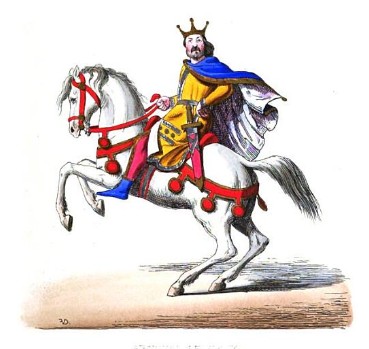 Arnulf I the Great Count of Flanders

Arnulf of Flanders (c. 890–964), called the Great, was a French nobleman and the third count of Flanders. He ruled from 918 until his death. He ruled an expanded County of Flanders, an area that is now northwestern Belgium and southwestern Netherlands.

At the death of their father in 918 Arnulf became Count of Flanders. His brother Adelolf succeeded to the County of Boulogne. When Adeloft died in 933 Arnulf took control of Boulogne and Ternois. His nephews were still young so it was probably as their guardian. Later he gave the countship of Boulogne to his nephew, Arnulf II.

Arnulf I greatly expanded Flemish rule to the south. He took over all or part of Artois, Ponthieu, Amiens, and Ostrevent. Arnulf exploited the conflicts between Charles the Simple and Robert I of France, and later those between Louis IV and his barons. In his southern expansion Arnulf had conflict with the Normans. They were trying to secure their northern frontier. This led to the 942 murder of the Duke of Normandy, William Longsword, at the hands of Arnulf's men. The Vikings became less of a threat during the later years of Arnulf's life. He worked on reforming his county government.

Arnulf's son, Baldwin III died in 962 leaving Arnold a crisis of succession. Baldwin's son Arnulf II 'the Young' was still a child and his succession was disputed. Arnulf offered the king, Lothair of France, Artois, Ponthieu, and Ostrevant in exchange for the king's protection of Arnulf II. His grandson inherited a weakened county of Flanders when he came of age. Arnold died on 27 March 964.

The name of Arnulf's first wife is unknown but he had at least one daughter by her:

All content from Kiddle encyclopedia articles (including the article images and facts) can be freely used under Attribution-ShareAlike license, unless stated otherwise. Cite this article:
Arnulf I, Count of Flanders Facts for Kids. Kiddle Encyclopedia.