William I, Duke of Normandy facts for kids 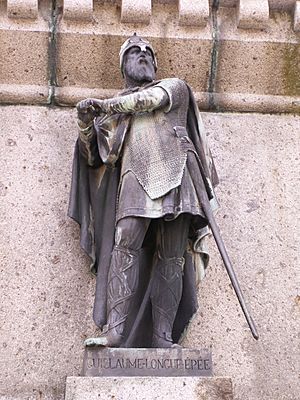 Statue of William Longsword as part of the Six Dukes of Normandy statue in Falaise.

William I Longsword (c. 900–942) was the second "Duke of Normandy". William added to his father's territories. He also began to expand Norman influence in West Francia (France).

William was born to the Viking Rollo and his Christian wife Poppa of Bayeux. He was born overseas probably in England.

William succeeded his father as leader in 927 Early in his reign he faced a rebellion from by other Normans who did not think he was fit to lead them. The leader of this rebellion was Riouf of Évreux. At this same time William sent his wife Sprota to Fécamp where their son Richard was born.

In 933, William I Longsword swore loyalty to Raoul as King of Western Francia. In turn Raoul gave him lordship over much of the lands of the Bretons including Avranches and the Cotentin. But the Bretons fought to keep these lands. They were led by Alan II, Duke of Brittany and Count Berenger of Rennes. It ended shortly with Alan fleeing to England and Beranger seeking to be on friendly terms with the Normans. In 935, William arranged a marriage between his sister Adela and William, count of Poitou with the approval of Hugh the Great. At the same time William married Luitgarde, daughter of count Herbert II of Vermandois. Her dowry gave William the lands of Longueville, Coudres and Illiers l'Eveque. 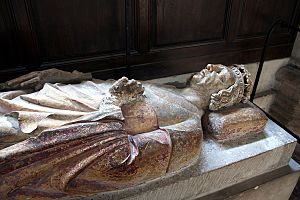 The funerary monument of William Longsword in the cathedral of Rouen, France. The monument is from the 14th century.

William Longsword attacked Flanders in 939 and Arnulf I, Count of Flanders, and Louis IV, King of France, attacked Normandy because of this. Arnulf captured the castle of Montreuil-sur-Mer defeating Herluin, Count of Ponthieu. Herluin helped William Longsword to take back the castle. William was excommunicated for attacking and destroying lands belonging to Arnulf. William pledged his loyalty to King Louis IV when they met in 940. In return for this he was confirmed in lands that had been given to his father, Rollo. Almost three years later, on 17 December 942 at Picquigny on the Somme, William Longsword was attacked and killed by followers of Arnulf while at a peace conference to settle their differences.

William had one son with Sprota.

William married secondly Luitgarde, daughter of Herbert II, Count of Vermandois. They had no children.

All content from Kiddle encyclopedia articles (including the article images and facts) can be freely used under Attribution-ShareAlike license, unless stated otherwise. Cite this article:
William I, Duke of Normandy Facts for Kids. Kiddle Encyclopedia.