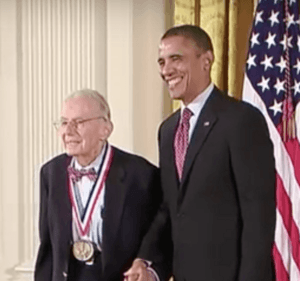 Rosenfeld with Barack Obama in 2011

Arthur Hinton "Art" Rosenfeld (June 22, 1926 – January 27, 2017) was an American physicist. He was Commissioner of the California Energy Commission from 2000 to 2010. From 1994 to 1999, he was a Senior Advisor for Energy Efficiency and Renewable Energy in the United States Department of Energy. In 2011, he was awarded the National Medal of Technology and Innovation by U.S. President Barack Obama.

Rosenfeld was born in Birmingham, Alabama. His wife of 53 years, Roselyn Bernheim "Roz" Rosenfeld, had died in 2009. They had two children.

Rosenfeld died from pneumonia on January 27, 2017 in Berkeley, California. He was 90.

All content from Kiddle encyclopedia articles (including the article images and facts) can be freely used under Attribution-ShareAlike license, unless stated otherwise. Cite this article:
Arthur H. Rosenfeld Facts for Kids. Kiddle Encyclopedia.