Article Three of the United States Constitution facts for kids

The judicial Power of the United States, shall be vested in one supreme Court, and in such inferior Courts as the Congress may from time to time ordain and establish. The Judges, both of the supreme and inferior Courts, shall hold their Offices during good Behavior, and shall, at stated Times, receive for their Services a Compensation which shall not be diminished during their Continuance in Office.

Section 1 of Article Three starts out by creating the Supreme Court – one court that will be more powerful than any other court in the country. It also gives Congress the power to create "inferior" (less powerful) federal courts.

It allows judges in these courts to get a regular salary for their work. Section 1 protects the judges by saying that their salaries will not be decreased while they are in office (working as a federal judge).

Section 1 says that judges "shall hold their Offices [keep their jobs] during good Behavior." This is meant to protect federal judges, and also to make sure that the federal judiciary is independent.

Before it won its independence in the American Revolutionary War, America was a colony of the British Empire. The Founding Fathers wrote the Constitution just four years after the War ended. They still remembered what the courts in the American colonies were like. As Thomas Jefferson wrote in the Declaration of Independence, Britain's King George III "made judges dependent on his will alone, for the tenure of their offices, and the amount and payment of their salaries."

This meant that the judges could not be independent or impartial. If they made a decision that King George did not like, they could be fired, or not paid. Judges who wanted to keep their jobs made decisions based on what King George would want, not based on what the law said. If judges are cannot be independent, or do not follow they law, courts are not fair, and there is no way for regular people to get justice.

The Constitution makes sure that this will not happen to United States federal judges. By saying judges "shall hold their Offices during good Behavior," Section 1 is basically allowing judges to keep their jobs for the rest of their lives. In Article Two, Section 4, the Constitution does say that Congress can take away a judge's job – but only after being convicted in a trial, and only for "Treason, Bribery, or other High crimes and Misdemeanors." (This is what Section 1 means by behavior that is not "good.") In other words, the Constitution makes sure that all judges will lose their jobs for making even the slightest unpopular decision. This denies judges the freedom to be independent, and to make the decisions that they think are fair, and makes them choose between right and reelection.

Article III clearly allows only one Supreme Court. However, it does not say how many Supreme Court Justices (judges) there should be. Congress solved this problem in 1948 by passing a law. The law says that the Supreme Court will have 9 Justices, including one Chief Justice.

In both Section 1 and in Article One, Section 8, the Constitution gives Congress the right to create courts that are "inferior" to the Supreme Court. However, the Constitution does not say how many "inferior" courts there should be, or how they should be set up. It leaves those decisions to Congress. Congress decided to create two different kinds of "inferior" courts (also called "lower courts"). In the Judiciary Act of 1789, they created: 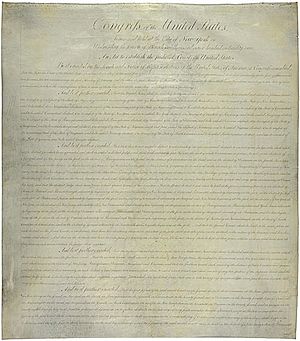 The Judiciary Act of 1789, which created the Article III and Article I lower federal courts

The judicial Power shall extend to all Cases, in Law and Equity, arising under this Constitution, the Laws of the United States, and Treaties made, or which shall be made, under their Authority;—to all Cases affecting Ambassadors, other public Ministers and Consuls;—to all Cases of admiralty and maritime Jurisdiction;—to Controversies to which the United States shall be a Party;—to Controversies between two or more States;—between a State and Citizens of another State;—between Citizens of different States;—between Citizens of the same State claiming Lands under Grants of different States, and between a State, or the Citizens thereof, and foreign States, Citizens or Subjects.

Trial of all Crimes, except in Cases of Impeachment, shall be by Jury; and such Trial shall be held in the State where the said Crimes shall have been committed; but when not committed within any State, the Trial shall be at such Place or Places as the Congress may by Law have directed.

Clause 1 of Section 2 explains the powers the federal court has, and the limits of those powers.

Clause 1 gives the federal courts the power to hear and judge actual "cases and controversies" only. For example, they cannot hear a case about a situation that might come up in the future. 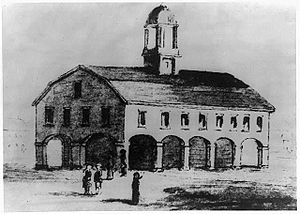 The Old Royal Exchange, in New York City, where the Supreme Court first met in February 1790

When Clause 2 talks about "jurisdiction," it is talking about who has the power to hear a case. 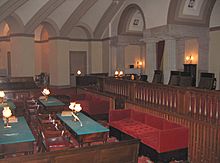 The Old Supreme Court Chamber in the U.S. Capitol, where the Court met from 1819 until 1860

However, the Supreme Court can only review a case on appeal if it thinks the lower court's decision breaks a law or goes against the Constitution.

In 1795, the Eleventh Amendment changed part of Clause 2. It took away the federal judiciary's power to get involved in lawsuits between states and citizens of other states or countries.

Marbury v. Madison also created an important power called judicial review. This is the Supreme Court's ability to review whether a law, treaty, or executive rule breaks a law that already exists, a state Constitution, or the United States Constitution. After Marbury, the Supreme Court started keeping an eye on what the state and federal governments were doing, instead of just trying cases that people brought to them.

Clause 2 says that the Supreme Court has "judicial power [over] all Cases, in Law and Equity, arising under this Constitution [and] the Laws of the United States...." However, it does not say exactly what this means. The Supreme Court clarified this in a case called Osborn v. Bank of the United States (1824). Supreme Court Justice John Marshall wrote an opinion about what a "federal" case is, and what "arising under" the Constitution or federal laws means. Basically, he said a case is federal – and under the federal courts' original jurisdiction – if: 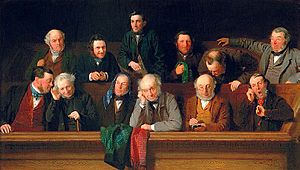 A nineteenth-century painting of a jury.

Clause 3 of Section 2 says that federal crimes have to be tried in front of a jury, unless the defendant does not want a jury. The only type of federal crime that is not tried before a jury is an impeachment. (Article One, Section 3 of the Constitution says that only the United States Senate can try impeachment cases.)

Clause 3 also says the person's trial must be held in the state where they did the crime. If they did not do the crime in any particular state, then Congress gets to choose where the trial will be held.

Several of the Constitutional Amendments in the Bill of Rights talk more about the rights of people who are on trial in criminal or civil court.

Treason against the United States, shall consist only in levying War against them, or in adhering to their Enemies, giving them Aid and Comfort. No Person shall be convicted of Treason unless on the Testimony of two Witnesses to the same overt Act, or on Confession in open Court.

The Congress shall have Power to declare the Punishment of Treason, but no Attainder of Treason shall work Corruption of Blood, or Forfeiture except during the Life of the Person attainted.

The last section of Article 3 talks about treason and how it should be punished. The Founding Fathers wanted to make sure that Americans' rights were protected. They also knew that in the past, in England, some kings had gotten rid of their political opponents just by accusing them of treason. For these reasons, the Founders wanted to make sure the Constitution said specifically what crimes were treason; what would be needed to find people guilty; and what the punishments could be. 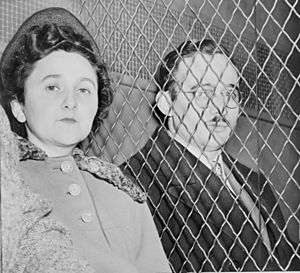 Julius and Ethel Rosenberg, who were executed for treason in 1953 for spying and giving the Soviet Union information about the atomic bomb

The Constitution is very specific about what crimes are treason:

Section 3 also makes it clear that treason must be an "overt act." This means that to commit treason, a person must actually do something, not just plan to do it. For example, if a group of people got together and planned to attack part of the United States, that would not be treason because they had not actually done anything yet to hurt the country. If they did attack the United States, that would be an overt act, and it would be treason.

Finally, Section 3 talks about punishment for people found guilty of treason. It gives Congress the power to decide the punishment. However, there is one punishment that the Constitution does not allow: punishing a person's family and descendants for that person's crime. In English law, if a person was convicted of treason, their punishment would include an "Attainder" (also called a "Corruption of Blood"). This meant that not only the person, but their family and heirs, would be punished and thought of as guilty. Once a person was "attainted," they would be executed. However, their heirs would also lose the right to inherit that person's land, property, or money.

The end of Section 3 specifically says that this punishment is not allowed. When the Founders wrote "no Attainder of Treason shall work Corruption of Blood, or Forfeiture except during the Life of the Person attainted," they meant: "No heirs may be punished, and Congress can make the traitor forfeit (give up) their property, but only during their lifetime." Their heirs would have to be able to inherit their property when the traitor died.

All content from Kiddle encyclopedia articles (including the article images and facts) can be freely used under Attribution-ShareAlike license, unless stated otherwise. Cite this article:
Article Three of the United States Constitution Facts for Kids. Kiddle Encyclopedia.