Ashford is a town in Houston County, Alabama, United States. It is part of the Dothan, Alabama Metropolitan Statistical Area. The town was incorporated in June 1891. For most of its history, it was a center for naval stores production, pulpwood harvesting, and cotton agriculture. The population was 2,148 at the 2010 census, up from 1,853 at the 2000 census.

Train Depot - In March 1888, the Alabama Midland Railway built a small depot of Victorian railroad architecture in Ashford to be a waystation along the Bainbridge-to-Montgomery route. The depot was the only building to survive the 1915 fire that destroyed the rest of the town. The original depot received additions at least twice—an enclosed warehouse and open loading dock were added to the east, followed by racially segregated passenger waiting rooms on the west side. The depot faced two sidings that served for loading turpentine from the Adams Company still 1 block away, and pulpwood. Cotton bales, fertilizer, and a single sweet potato crop were loaded from both sidings. The depot changed hands as railroads consolidated. The Alabama Midland was absorbed by the Atlantic Coast Line which merged in the 1980s with Seaboard Air Line to form the Seaboard Coast Line. CSX bought Seaboard Coast Line after the Ashford Depot fell into disuse. Ashford depot fell into disrepair after it closed in 1978. In the 1980s, concerned citizens founded a preservation committee and received a grant to add a new roof to the building. This committee also placed the depot on the Alabama Register of Historical Places. It remained active into the 1990s. Former Mayor Bryan Alloway revived the depot preservation committee after his 2000 election. This committee will incorporate and seek tax-exempt status in 2005. It has received two US Department of Transportation grants ($850,000), two Alabama Department of Economic and Community Affairs grants ($290,000), and one Alabama Resource Conservation & Development (RC&D) grant ($7500) to thoroughly renovate the depot. Construction began in Fall 2004. The Committee and Ashford City officials held a ribbon cutting ceremony on November 17, 2005, to mark the end of Phase I of the reconstruction. Now the depot can be used for reunions, birthdays, and social events that the city might sponsor.

Ashford first appeared on the 1900 U.S. Census as an incorporated town, then in Henry County. In 1903, Ashford was shifted into the new county of Houston. See also Ashford Precinct below.

There were 867 households, out of which 27.8% had children under the age of 18 living with them, 51.6% were married couples living together, 14.4% had a female householder with no husband present, and 28.1% were non-families. 24.8% of all households were made up of individuals, and 13.3% had someone living alone who was 65 years of age or older. The average household size was 2.48 and the average family size was 2.94. 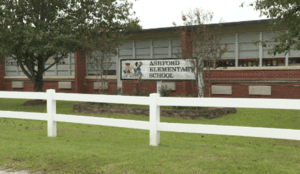 Ashford Academy was once a private school that closed its doors at the end of the 2014–2015 school year.

All content from Kiddle encyclopedia articles (including the article images and facts) can be freely used under Attribution-ShareAlike license, unless stated otherwise. Cite this article:
Ashford, Alabama Facts for Kids. Kiddle Encyclopedia.