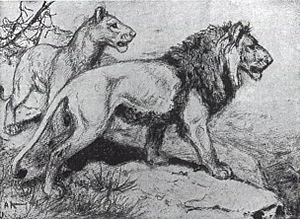 Male and female Asiatic lions. Sketch by A. M. Komarov.

The Asiatic lion's fur ranges in colour from ruddy-tawny, heavily speckled with black, to sandy or buffish grey, sometimes with a silvery sheen in certain lights. Males have only moderate mane growth at the top of the head, so that their ears are always visible. The mane is scanty on the cheeks and throat where it is only 10 cm (3.9 in) long. About half of Asiatic lions' skulls from the Gir forest have divided infraorbital foramina, whereas African lions have only one foramen on either side. The sagittal crest is more strongly developed, and the post-orbital area is shorter than in African lion. Skull length in adult males ranges from 330 to 340 mm (13 to 13 in), and in females from 292 to 302 mm (11.5 to 11.9 in). It differs from the African lion by a larger tail tuft and less inflated auditory bullae. The most striking morphological character of the Asiatic lion is a longitudinal fold of skin running along its belly.

Compared to populations of African lions, the Asiatic lion has less genetic variation, which may result from a founder effect in the recent history of the remnant population in the Gir Forest. 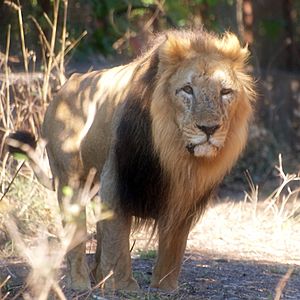 A male with a rather thick mane in Gir Forest

Colour and development of manes in male lions varies between regions, among populations and with age of lions. In general, the Asiatic lion differs from the African lion by a less developed mane.

Manes of most lions in ancient Greece and Asia Minor were also less developed and did not extend to below the belly, sides or ulnas. Lions with such smaller manes were also known in the Syrian region, Arabian peninsula and Egypt, whereas Barbary and Cape lions had underbelly hair.

In contrast, a relief from Nineveh in the Mesopotamian Plain shows a lion with underbelly hair. Therefore, it was suspected that the Mesopotamian lion may have been a distinct subspecies, for which the scientific name Panthera leo mesopotamica was proposed. 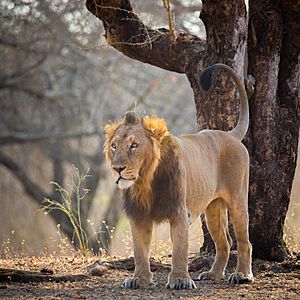 Male Asiatic lions are solitary or associate with up to three males forming a loose pride. Pairs of males rest, hunt and feed together, and display marking behaviour at the same sites. Females associate with up to 12 females forming a stronger pride together with their cubs. They share large carcasses among each other, but seldom with males. Female and male lions usually associate only for a few days when mating, but rarely travel and feed together.

Results of a radio telemetry study indicate that annual home ranges of male lions vary from 144 to 230 km2 (56 to 89 sq mi) in dry and wet seasons. Home ranges of females are smaller, varying between 67 and 85 km2 (26 and 33 sq mi). During hot and dry seasons, they favour densely vegetated and shady riverine habitats, where prey species also congregate.

Coalitions of males defend home ranges containing one or more female prides. Together, they hold a territory for a longer time than single lions. Males in coalitions of three to four individuals exhibit a pronounced hierarchy with one male dominating the others.

In general, lions prefer large prey species within a weight range of 190 to 550 kg (420 to 1,210 lb) irrespective of their availability. Domestic cattle have historically been a major component of the Gir lions' diet. Inside the Gir National Park, lions predominantly kill chital, cattle, buffalo, sambar and nilgai, less frequently also wild boar. Chital is the most commonly killed prey, which weighs only around 50 kg (110 lb). Sambar is especially prone to predation by lions when descending from the hills during summer. Outside the protected area where wild prey species do not occur, lions prey on buffalo and cattle, rarely also on camel. Most of the prey is killed less than 100 m (330 ft) away from water bodies. Lions charge prey from close range and drag their kills into dense cover.

In 1974, the Forest Department estimated the wild ungulate population at 9,650 individuals. In the following decades, the wild ungulate population has grown consistently to 31,490 in 1990 and 64,850 in 2010, including 52,490 chital, 4,440 wild boar, 4,000 sambar, 2,890 nilgai, 740 chinkara, and 290 four-horned antelope. In contrast, populations of domestic buffalo and cattle declined following resettlement, largely due to direct removal of resident livestock from the Gir Conservation Area. The population of 24,250 domestic livestock in the 1970s declined to 12,500 in the mid-1980s, but increased to 23,440 animals in 2010. Following changes in both predator and prey communities, Asiatic lions shifted their predation patterns. Today, very few livestock kills occur within the sanctuary, and instead most occur in peripheral villages. In and around the Gir forest, depredation records indicate that lions killed on average 2,023 livestock annually between 2005 and 2009, and an additional 696 individuals in satellite areas.

Dominant males consume about 47% more from kills than their coalition partners. Aggression between partners increases when coalitions are large, but kills are small.

A pride composed of females and cubs in Gir Forest

Asiatic lions mate foremost between September and January. Mating lasts three to six days. During these days, they usually do not hunt, but only drink water. Gestation lasts about 110 days. Litters comprise one to four cubs. Dominant males mate more frequently than their coalition partners. During a study carried out between December 2012 and December 2016, three females were observed switching mating partners in favour of the dominant male. The average interval between births is 24 months, unless cubs die due to infanticide by adult males or because of diseases and injuries. Cubs become independent at the age of about two years. Subadult males leave their natal pride latest at the age of three years and become nomads until they establish their own territory. 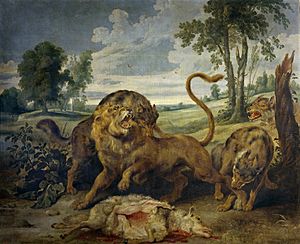 Three wolves attacking a lion over a caprine. Painting by Paul de Vos from 1638–1640, in the Museo del Prado, Madrid.

The Gir forest and surrounding landscapes are home to sympatric carnivores of the Asiatic lion, including Indian leopard, striped hyena, jungle cat, Asiatic wildcat and rusty-spotted cat. The golden jackal scavenges on carcasses of large herbivores and preys on chital fawn and Indian hares.

The historical lion range used to encompass the Asiatic cheetah, tiger, Indian wolf, and brown and sloth bears. In the Trans-Caucasus, they preyed on Asiatic wild ass.

Until the end of the 19th century, the Asiatic lion coexisted with the tiger in parts of Western and Central Asia, and the Indian subcontinent. The lion and Caspian tiger occurred in northern Iraq, and in Transcaucasia. In India, like the Gir lion, the Bengal tiger inhabits the ecoregion of Kathiawar-Gir dry deciduous forests. The lion population is restricted to the Kathiawar Peninsula in Saurashtra, whereas the Bengal tiger occurs in the border-triangle of Gujarat, Maharashtra and Madhya Pradesh.

All content from Kiddle encyclopedia articles (including the article images and facts) can be freely used under Attribution-ShareAlike license, unless stated otherwise. Cite this article:
Asiatic Lion Facts for Kids. Kiddle Encyclopedia.