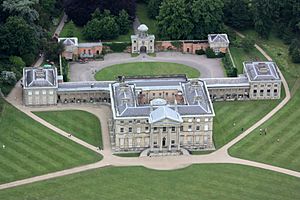 Attingham Hall from the air. 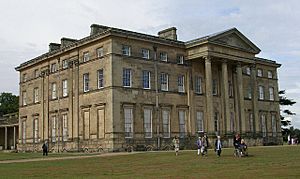 Attingham Park is an English country house and estate in Shropshire. Located near the village of Atcham, on the B4380 Shrewsbury to Wellington road. It is owned by the National Trust. It is a Grade I listed building.

Attingham Park was built in 1785 for Noel Hill, 1st Baron Berwick. Lord Berwick, a former MP for Shropshire, received his title in 1784 during the premiership of William Pitt the Younger, during which he had been instrumental in the reorganisation of the East India Company. Lord Berwick already owned a house on the site of Attingham Park called Tern Hall, but with money he received along with his title he commissioned the architect George Steuart to design a new and grander house to be built around the original hall. The new country house encompassed the old property entirely, and once completed it was given the name Attingham Hall.

Across the 640 acre parkland there are five Grade II* listed buildings, including the stable block, the Tern Lodge toll house which can be seen on the B4380, and two bridges that span the River Tern. There are also twelve Grade II listed structures including the retaining walls of the estate, the bee house, the ice house, the walled garden, the ha-ha, which can be seen in the front of the mansion, and the Home Farm.

Historical use of the site

The archaeology of Attingham Park is diverse covering many different periods of history and human habitation. People have lived around the area of the estate for around 4,000 years since the Bronze Age, utilising the rich alluvial soils for agriculture. There are seven scheduled ancient monuments across the wider estate including an Iron Age settlement, Roman forts and a significant portion of the fourth largest civitas in Roman Britain, Viroconium, on the site of the nearby village of Wroxeter.

There are also Saxon palaces, and a mediaeval village which was called Berwick Maviston. Today the remains of a moat and fish ponds from the old manor can still be seen. The manor and the village dated back to the Norman invasion, being mentioned in the 1086 Domesday book. The original manor fell into disrepair in mediaeval times; another house known as Grant's Mansion was recorded on the site in 1790. The village was occupied until the late 1700s when the newly created Baron Berwick built Attingham and removed the village from his land. The title of Baron Berwick comes from the name of this village.

Attingham, including Cronkhill, was the seat of the Barons Berwick until that title became extinct in 1953. On the death of Thomas Henry Noel-Hill, 8th Baron Berwick (1877–1947) who died childless, the Attingham Estate, comprising the mansion and some 650 acres, was gifted to the National Trust.

Attingham Park was designed by George Steuart, a follower of James Wyatt, whose only surviving country house this is. It was built from 1772 to 1785 for Noel Hill, 1st Baron Berwick, on the site of an earlier house called Tern Hall (which had been built to his own designs by Richard Hill of Hawkstone). The proportions have been criticised: for Simon Jenkins "The facade is uncomfortably tall, almost barracks-like, the portico columns painfully thin". There is a large entrance court, with an imposing gatehouse, and two single storey wings stretch out to either side of the main block.

In 1805 John Nash added the picture gallery, a project that was flawed from the beginning as it suffered from leaks. Constructed using cast iron and curved glass to give the effect of coving, it throws light into the gallery below. In 2013 work began on building a new protective roof above the delicate Nash roof, replacing one installed in the 1970s with a new one which will stop leakage and reduce natural weather wear. The new roof will have temperature control, blinds, and UV resistant glass. The 2nd baron went bankrupt, and all the contents of the house were auctioned in 1827; some were reacquired later. The main reception rooms were divided into a male and female set on either side of the house. Angelica Kaufmann decorated a boudoir and there are three of her paintings in the drawing room. 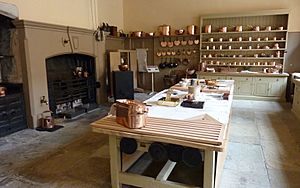 The nearby Italianate villa of Cronkhill on the estate is an important pioneer of this style in England. It was designed by John Nash for the 2nd Lord Berwick, as a generous gesture for his friend and agent, Francis Walford, during the same time the Picture Gallery and staircase was being built. Once a part of the wider estate, it is now isolated on a hillside overlooking the riverside. Although the villa is owned by the National Trust, it is privately tenanted and only open for visitors a few days of the year. 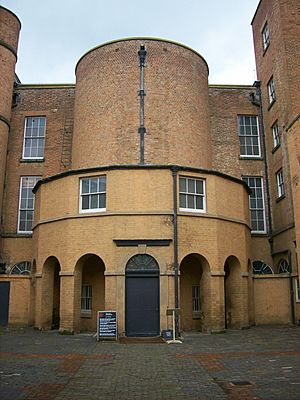 Attingham Park is now the regional headquarters of the National Trust and also on the estate is the Shropshire office of Natural England.

The park was landscaped by Humphry Repton and includes woodlands and a deer park, with between 200 and 300 head of Fallow deer (according to season).

The estate has a walled garden and an orchard, which grows fresh produce which is used on the estate in the tearooms, and sold to visitors. The meat from the Fallow deer is also sold in the shop during the shooting season, in winter and early spring.

The River Tern, which flows through the centre of the estate, joins the larger River Severn at the confluence just south of the Tern Bridge. Repton attempted to build a weir, the remains of which can now be seen, near the confluence but due to flooding it was washed away.

The park is a designated Site of Special Scientific Interest due to it being home to many rare species of invertebrates. The amount of deadwood left by fallen trees around the parkland makes it the perfect habitat for a variety of different species, primarily beetles. There are seven units of SSSI around the park totalling to 190 hectares or 470 acres, nearly three-quarters of the entire estate.

All content from Kiddle encyclopedia articles (including the article images and facts) can be freely used under Attribution-ShareAlike license, unless stated otherwise. Cite this article:
Attingham Park Facts for Kids. Kiddle Encyclopedia.