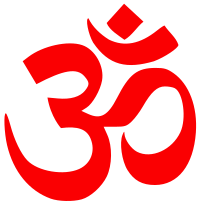 Om (also spelled Aum), is the most sacred symbol in Hinduism. Hindu scriptures tell many things about this symbol. In Hinduism, Om is like calling god's name towards you. This name is generally said three times, before chanting any prayers. Om is usually related to the Hindu God Shiva, who is the destroyer god.

All content from Kiddle encyclopedia articles (including the article images and facts) can be freely used under Attribution-ShareAlike license, unless stated otherwise. Cite this article:
Aum Facts for Kids. Kiddle Encyclopedia.