In the Australian state of Victoria, the sport of Australian rules football is the most popular football code. The game's popularity in Victoria stems from its origins in Melbourne in the 1850s, with the first club (the Melbourne Football Club) and the first league (the Victorian Football Association) both based in the city. Ten of the eighteen teams participating in the Australian Football League (AFL) are based in Victoria, as a result of the league's origins as the Victorian Football League (VFL). The Melbourne Cricket Ground, with a capacity of 100,024 people, is considered the "spiritual home" of the game, and hosts the sport's largest event, the AFL Grand Final, yearly.

Tom Wills began to devise Australian rules in Melbourne in 1858. (Although H.C.A. Harrison, Wills' cousin, was also named, much later, as an official father of the game his role does not, now, seem to have been significant at this very early stage.) A letter by Wills was published in Bell's Life in Victoria & Sporting Chronicle on 10 July 1858, calling for a "foot-ball club" with a "code of laws" to keep cricketers fit during winter. A match, played at the Richmond Paddock (later known as Yarra Park next to the MCG) on 31 July 1858, was probably a game of folk football, or one based on unidentified English school rules. However, few details of the match have survived.

The Melbourne Football Club was founded on Saturday 14 May 1859, one of the world's first football clubs in any code. For many years unjustified claims have been made about a football match between Melbourne Grammar School and Scotch College. It began on 7 August 1858, umpired by Wills and John McAdam. A second day of play took place on 21 August and a third, and final, day on 4 September. The two schools have competed annually ever since. However, the rules used by the two teams in 1858 had little in common with the eventual form of Australian football since that code had not yet been written. 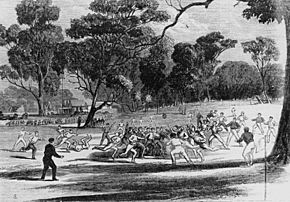 A game at the Richmond Paddock in the 1860s. A pavilion at the MCG is on the left in the background. (A wood engraving made by Robert Bruce on 27 July 1866.)

The Melbourne Football Club rules of 1859 are the oldest surviving set of laws for Australian football. They were drawn up at the Parade Hotel, East Melbourne, on 17 May, by Wills, W. J. Hammersley, J. B. Thompson and Thomas Smith (some sources include H. C. A. Harrison). The 1859 rules did not include some elements that soon became important to the game, such as the requirement to bounce the ball while running, and Melbourne's game was not immediately adopted by neighbouring clubs. Before each match the rules had to be agreed by the two teams involved. By 1866, however, several other clubs had agreed to play by an updated version of Melbourne's rules.

There were also numerous rules changes in this early period.

Formation of the VFL

A rift in the VFA led to the formation of the Victorian Football League (VFL), which commenced play in 1897 as an eight-team breakaway of the stronger clubs in the VFA competition: Carlton, Collingwood, Essendon, Fitzroy, Geelong, Melbourne, St Kilda and South Melbourne. The first season concluded with Essendon finishing as the premiers (winners).

In 1982, in a move which heralded big changes within the sport, one of the original VFL clubs, South Melbourne Football Club, relocated to the rugby league stronghold of Sydney and became known as the Sydney Swans.

In the late 1980s, strong interstate interest in the VFL led to a more national competition; two more non-Victorian clubs, the West Coast Eagles and the Brisbane Bears began playing in 1987.

The VFA/VFL became a secondary league, although even it has grown to accommodate a team from Tasmania.

Even the biggest locally grown suburban clubs, elevated into the national league, continue struggle for survival, competing for marketshare. Fourteen years after South Melbourne's difficulties led them to move to Sydney, similar problems at the Fitzroy Football Club result in a merger, forming the Brisbane Lions. Although a small consolation of these club's recent success has been establishing renewed interest with their Melbourne based supporters, other clubs, such as the historic Melbourne, Western Bulldogs (formerly Footscray), North Melbourne and Carlton Clubs are assisted by the AFL to remain in the national competition. Many suggestions have been made in response to issues of overcrowding [1] but the AFL has been somewhat reluctant to make a drastic change, due to both the history and supporters' passion for their club - save for the merger of Fitzroy and the Bears.

Women's Australian rules football is growing in popularity in Victoria.

With a total participation of 223,999, Victoria has a participation rate of around 4% per capita, makes it the equal third most supported state (with Western Australia and South Australia) 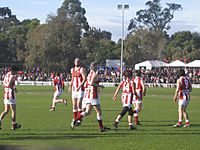 The Victorian representative team is known as the Big V and have played State of Origin representative matches against all other Australian states. However, since 1999 they have only played at Under 19 and state league level, with the senior professional team only making a once off appearance in the 2008 AFL Hall of Fame Tribute Match.

All content from Kiddle encyclopedia articles (including the article images and facts) can be freely used under Attribution-ShareAlike license, unless stated otherwise. Cite this article:
Australian rules football in Victoria Facts for Kids. Kiddle Encyclopedia.