Azurite Peak is an 8,400-foot (2,600-metre) double-summit mountain located at the common boundary point of Okanogan County, Skagit County, and Whatcom County in Washington state. It is part of the Okanogan Range which is a sub-range of the North Cascades Range. Azurite Peak is situated north of Azurite Pass on land administered by Okanogan National Forest. The nearest higher neighbor is Tower Mountain, 5.24 miles (8.43 km) to the south-southeast, and Mount Ballard lies 1.97 miles (3.17 km) to the north. Remnants of a small pocket glacier are found on the east aspect. The Pacific Crest Trail traverses the base of Azurite Peak.

Azurite Peak is located in the marine west coast climate zone of western North America. Most weather fronts originate in the Pacific Ocean, and travel northeast toward the Cascade Mountains. 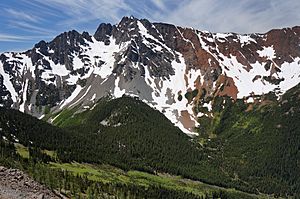 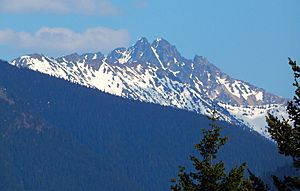 All content from Kiddle encyclopedia articles (including the article images and facts) can be freely used under Attribution-ShareAlike license, unless stated otherwise. Cite this article:
Azurite Peak Facts for Kids. Kiddle Encyclopedia.