Bagaceratops, meaning "small-horned face" (Mongolian Baga = "small"; Greek ceratops = "horn face", is a genus of ceratopsian dinosaur that lived in what is now Mongolia around 80 million years ago, during the Late Cretaceous. Although emerging late in the reign of the dinosaurs, Bagaceratops had a fairly primitive anatomy and kept the small body size that characterized early ceratopsians.

Bagaceratops grew to an adult size of about 1 metre (3.3 ft) long, 50 centimetres (1.6 ft) high, and weighed around 22 kilograms (50 lb). It had a smaller frill (which lacked fenestrae), and only ten grinding teeth per jaw, and more triangular skull than its close relative, Protoceratops.

Bagaceratops evolved later but retains more primitive characteristics than its earlier relative. Otherwise the two dinosaurs were very similar, each had a beak but no brow horns, and a small horn-like prominence on the snout.

The first remains of Bagaceratops were discovered in the Gobi Desert during the 1970s by a joint expedition composed of Mongolian and Polish scientists and it was described by two of the expeditions leading scientists, Teresa Maryanska and Halszka Osmólska (1975). Several of these Bagaceratops specimens are at Poland's Paleobiological Institute in Warsaw. 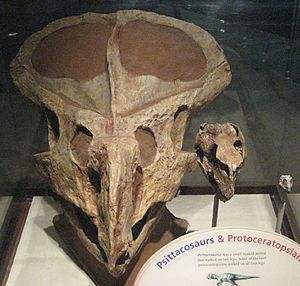 Skull cast of a juvenile at the right, along with skulls of two other primitive ceratopsians

Bagaceratops is known from five complete and twenty partial crania, the longest of which is 17 cm long. The skulls are spread throughout the life stages of the animal, with the smallest being only 4.7 cm long, so the growth stages are relatively well understood. The smaller juvenile skulls were about the same size as a golf ball. Only fragmentary remains of Bagaceratops post-cranial anatomy have been found.

Bagaceratops belonged to the Ceratopsia, a group of herbivorous dinosaurs with parrot-like beaks which thrived in North America and Asia during the Cretaceous Period, which ended roughly 66 million years ago.

Bagaceratops, like all ceratopsians, was a herbivore. During the Cretaceous, flowering plants were "geographically limited on the landscape", and so it is likely that this dinosaur fed on the predominant plants of the era: ferns, cycads and conifers. It would have used its sharp ceratopsian beak to bite off the leaves or needles.

All content from Kiddle encyclopedia articles (including the article images and facts) can be freely used under Attribution-ShareAlike license, unless stated otherwise. Cite this article:
Bagaceratops Facts for Kids. Kiddle Encyclopedia.