Ballan is a small town in Victoria, Australia. It is a part of the Shire of Moorabool. Ballan is 78 km (48 mi) north west of Melbourne, on the Werribee River. In 2006 there were 1808 people living in Ballan. The Western Freeway goes past the town.

The first people to live in the Ballan area were the Aborigines, the Wautharong people. The area was rich in animals with kangaroos, kangaroo rats, bandicoots, dingos, and two sorts of native cat. Many of these animals had gone by the end of the 1800s, with Europen settlement.

The first European settlers came from Tasmania, landing near Geelong, Victoria, and working their way up the Moorabool River with their sheep flocks. Robert Von Steiglitz first came to the area in 1838. He named it after Ballan in Ireland. Other early settler names included Covvie, Stead, Wallace and Egerton.

There were fights between the Wautharong people and white farmers during settlement. Robert Von Steiglitz said stated in his diary:

... it may be questioned by some feather-bed philanthropist whether we had the right to take the country from the blacks but I believe the general rule is that if people cultivate or graze the land they have a claim to it. These creatures did neither ...

Gold was found in the area in 1851. A lot of people came to look for gold. This was part of the Victorian Gold Rush. The Ballan Hotel dates from the gold rush period in 1851. The town was an important staging point for coaches going to the Ballarat goldfields. The Post Office opened in September 1853 although there were two earlier offices in the area named Ballan.

St. Paul’s Presbyterian Church in Ballan was opened in July 1866.

On 15 November 2003 a Sprinter train going to Ballarat was derailed (came off the tracks) between Ballan and Gordon hurting 61 people when it crashed into a car on a country railway crossing.

The town has an Australian Rules Football team playing in the Central Highlands Football League. It also has two senior and three junior cricket teams in the Ballarat Cricket Association. 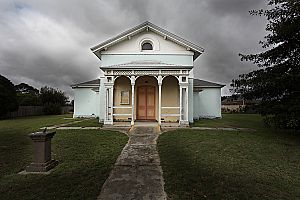 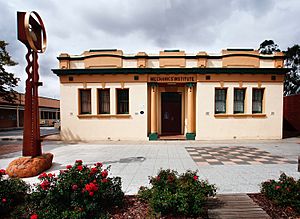 All content from Kiddle encyclopedia articles (including the article images and facts) can be freely used under Attribution-ShareAlike license, unless stated otherwise. Cite this article:
Ballan, Victoria Facts for Kids. Kiddle Encyclopedia.