Kids Encyclopedia Facts
This page is about the town in Puerto Rico. For the neighbourhood in Barcelona, see La Barceloneta.

Barceloneta ( Little Barcelona) is a municipality in Puerto Rico and is located in the north region, bordering the Atlantic Ocean, north of Florida, east of Arecibo and west of Manati. Barceloneta is spread over 3 wards and Barceloneta Pueblo (the downtown area and the administrative center of the city). It is part of the San Juan-Caguas-Guaynabo Metropolitan Statistical Area.

About a decade after its foundation, the town had a significant economic development led by agriculture and industry. By 1894, there were three sugarcane estates, 93 sugar mills, and 100 of other fruits.

In 1899, Barceloneta requested to be annexed to the town of Manatí. An election was scheduled for August 14, 1899 to decide the matter. However, on August 8, the island suffered the effects of Hurricane San Ciriaco, which prevented the elections from being held. The following year, Governor George Whitefield Davis ordered the annexation of Barceloneta into Manatí. The annexation was short-lived, though; 11 years later, the government reinstated Barceloneta as a municipality.

After sugarcane mill Central Plazuela closed in 1963, Barceloneta started reinforcing its agricultural economy towards pineapples and other minor fruits. Efforts to revive the economy weren't that successful, until pharmaceutical industries started establishing themselves in the town during the 70s.

Because of its location next to the Río Grande de Manatí, Barceloneta was also known for many years a site of important port activity, for both the shipment of sugar and salt, as well as a passenger route to New York City and Barcelona. Don Bonocio's son was the owner of a sail ship that made those routes.

The Municipality of Barceloneta sits on the northern karst region of Puerto Rico, on the shores of the Atlantic Ocean. It is bordered by the municipalities of Arecibo, Florida, and Manatí. In terms of physical features, the municipality occupies a roughly rectangular area in the northern coast of the island. It has a surface area of 36.4 square miles (94.24 km2).

Barceloneta's terrain is predominantly plain. Since it is located in the karst region, it features hills, ponors, and caves. Near the coast, the terrain is occupied by the Tiburones cienaga.

The Río Grande de Manatí travels across the municipalities of Manatí and Barceloneta and drains into the Atlantic Ocean. Barceloneta also features the Caño Tiburones, the largest swamp on the island. 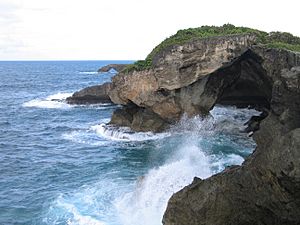 A coast scene in Barceloneta

The flag of Barceloneta is a variation of the flag of Barcelona in Spain, from where the town borrows its name. It features four fields, two of them bearing the cross of Saint George (in Catalan, Sant Jordi), with five red and yellow bars in vertical direction to the right of each cross. These are all symbols pertaining to the city of Barcelona, and the community of Catalonia, where it is located, since the town was founded by a Catalan immigrant. The remaining two fields in the flag are blue, representing the Atlantic Ocean, which lies to the north of Barceloneta.

Barceloneta's coat of arms is similar to the flag, since it features the same Catalonian symbols. However, it features three sugarcane flowers ("guajanas") on top of the blue fields. The "guajanas" symbolize the source of life of the old agricultural economy of Barceloneta. The blue symbolizes the beaches and marine ports that contributed to the industry and commerce of the town. Like many coat of arms, it features a crown with three towers.

Barceloneta is referred to as La Ciudad de las Piñas (city of the pineapples) due to its plantations of that fruit. It is also known as La Ciudad Industrial (industrial city) for its many industries, most of them pharmaceutical.

Other names are Ciudad de los Indios (town of the Indians) and Pueblo de Sixto Escobar (town of Sixto Escobar) for being the birthplace of the Puerto Rican boxer.

Barceloneta has recently added the use of trolly cars free of charge for local transport within the town itself. If you're looking to go further than the town limits, there is a station for "carros publicos" or public car transportation. These work like a kind of taxi and, for a small fee, will take you to the next town, for example, Manati.

All content from Kiddle encyclopedia articles (including the article images and facts) can be freely used under Attribution-ShareAlike license, unless stated otherwise. Cite this article:
Barceloneta, Puerto Rico Facts for Kids. Kiddle Encyclopedia.