Manatí is a municipality of Puerto Rico on the northern coast, north of Morovis and Ciales; east of Florida and Barceloneta; and west of Vega Baja. Manatí is spread over 8 wards and Manatí Pueblo (The downtown area and the administrative center of the city). It is part of the San Juan-Caguas-Guaynabo Metropolitan Statistical Area.

Manatí was founded in 1738 by Don Pedro Menendez Valdes. The Iglesia Nuestra Señora de la Candelaria church was built in the seventeenth century and is still standing in its original spot. Manati is known as La Ciudad Metropolitana (The Metropolitan City), and also as La Atenas de Puerto Rico, (The Athens of Puerto Rico). It is named after a sea mammal, the manatee (which are also known as sea cows).

During those early years, the Mayor of the town was Jose Aulet. Juan Ponce de León picked the Manatí leg of the Manuatabón River as the first area to pan for gold. The Aulet family owned lands rich in pineapples, sugar cane, and green bananas. The Aulets sold the land to the government in 1985.

In 1853 the region shifted from mining to an expansion of agriculture, particularly cultivation and processing of sugar cane. The demand for and price of sugar remained high in international markets. The main commodity crop was sugar cane. Carpentry also became popular. During that year, the town consisted of 280 homes, 2 squares, 8 streets and a school with 50 pupils.

In 2012 Manati welcomed its first hotel, the Hyatt Place Hotel and Casino, that is scheduled to open in January 2014. The hotel broke ground in summer 2012. The hotel opened with 104 rooms, on March 5, 2014, alongside Casino Atlántico and a LongHorn Steakhouse ( Opened April 2014). Also the hotel counts with an outdoor swimming pool, 3 meeting rooms and a fitness center. The official name was Hyatt Place Manati & Casino <Hyatt Press>

Manati, is very popular for its beaches. Manati is part of the tourism district of Porta Altantico.<Puerto Rico Does it better campaign> 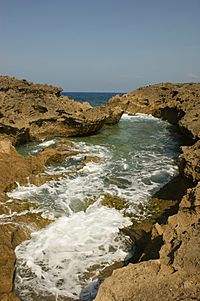 All content from Kiddle encyclopedia articles (including the article images and facts) can be freely used under Attribution-ShareAlike license, unless stated otherwise. Cite this article:
Manatí, Puerto Rico Facts for Kids. Kiddle Encyclopedia.