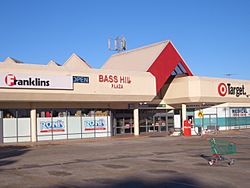 Bass Hill, a suburb of local government area Canterbury-Bankstown Council, is located 23 kilometres south-west of the Sydney central business district, in the state of New South Wales, Australia, and is a part of the South-western Sydney region.

Bass Hill is named after George Bass, a surgeon and explorer who was granted land here in 1798. He had arrived in the colony in 1795 on HMS Reliance and became friendly with midshipman Matthew Flinders and on arrival they decided to explore parts of the colony. In 1796 on a small boat called the Tom Thumb accompanied by a boy servant William Martin, they sailed into Botany Bay and explored the Georges River, twenty miles (32 km) beyond previous expeditions. They sailed as far as present day Georges Hall. For their exploration efforts Bass and Flinders were rewarded with 100-acre (0.40 km2) land grants in this area by Governor Hunter.

The area developed rapidly after the completion of Liverpool Road in 1814. Originally known as Irish Town because of the Irish settlements, it later became known as Upper Bankstown. It became officially known as Bass Hill in October 1924.

During World War II, Bass Hill was the location for a small transmitting station that was owned and operated by the RAAF. It was located on the corner of Manuka Crescent & Johnston Road. This facility worked in conjunction with the Bankstown Bunker on Black Charlies Hill in Condell Park, which also worked in conjunction with a remote receiving station that was located in Picnic Point.

The median age of the Bass Hill population was 36 years, 1 year below the national median of 37.

All content from Kiddle encyclopedia articles (including the article images and facts) can be freely used under Attribution-ShareAlike license, unless stated otherwise. Cite this article:
Bass Hill, New South Wales Facts for Kids. Kiddle Encyclopedia.