The bearded vulture (Gypaetus barbatus), also known as the lammergeier or lammergeyer, is a bird of prey. It is the only member of the genus Gypaetus.

It eats mainly carrion and lives and breeds on crags in high mountains in southern Europe, the Caucasus, Africa, the Indian subcontinent, and Tibet. The females lay one or two eggs in mid-winter that hatch at the beginning of spring. Populations are resident. 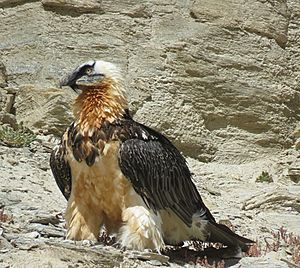 A Lammergeier in Puga valley in east of Ladakh.

Unlike most vultures, the bearded vulture does not have a bald head. This species is relatively small headed, although its neck is powerful and thick. It has a generally elongated, slender shape, sometimes appearing bulkier due to the often hunched back of these birds. The gait on the ground is waddling and the feet are large and powerful. The adult is mostly dark gray, rusty and whitish in color. It is grey-blue to grey-black above. The creamy-coloured forehead contrasts against a black band across the eyes and lores and bristles under the chin, which form a black beard that give the species its English name. Bearded vultures are variably orange or rust of plumage on their head, breast and leg feathers but this is actually cosmetic. This colouration may come from dust-bathing, rubbing mud on its body or from drinking in mineral-rich waters. The tail feathers and wings are gray. The juvenile bird is dark black-brown over most of the body, with a buff-brown breast and takes five years to reach full maturity. The bearded vulture is silent, apart from shrill whistles in their breeding displays and a falcon-like cheek-acheek call made around the nest.

The acid concentration of the bearded vulture stomach has been estimated to be of pH about 1 and large bones will be digested in about 24 hours, aided by slow mixing/churning of the stomach content. The high fat content of bone marrow makes the net energy value of bone almost as good as that of muscle, even if bone is less completely digested. A skeleton left on a mountain will dehydrate and become protected from bacterial degradation and the bearded vulture can return to consume the remainder of a carcass even months after the soft parts have been consumed by other animals, larvae and bacteria. 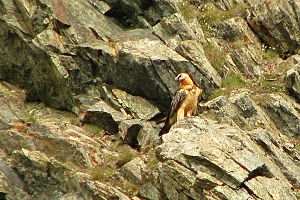 Bearded vulture on the rocks in Gran Paradiso National Park.

Like other vultures it is a scavenger, feeding mostly on the remains of dead animals. It usually disdains the actual meat, however, and lives on a diet that is typically 85–90% bone marrow. This is the only living bird species that specializes in feeding on marrow. The bearded vulture can swallow whole or bite through brittle bones up to the size of a lamb's femur and its powerful digestive system quickly dissolves even large pieces. The bearded vulture has learned to crack bones too large to be swallowed by carrying them in flight to a height of 50–150 m (160–490 ft) above the ground and then dropping them onto rocks below, which smashes them into smaller pieces and exposes the nutritious marrow. They can fly with bones up to 10 cm (3.9 in) in diameter and weighing over 4 kg (8.8 lb), or nearly equal to their own weight. After dropping the large bones, the bearded vulture spirals or glides down to inspect them and may repeat the act if the bone is not sufficiently cracked. This learned skill requires extensive practice by immature birds and takes up to seven years to master. Its old name of ossifrage ("bone breaker") relates to this habit. More seldom, these birds have been observed to try to break bones (usually of a medium size) by hammering them with their bill directly into rocks while perched. During the breeding season they feed mainly on carrion. They prefer limbs of sheep and other small mammals and they carry the food to the nest unlike other vultures which feed their young by regurgitation.

Live prey is sometimes attacked by the bearded vulture, with perhaps greater regularity than any other vulture. Among these, tortoises seem to be especially favored depending on their local abundance. Tortoises preyed on may be nearly as heavy as the preying vulture. When killing tortoise, bearded vultures also fly to some height and drop them to crack open the bulky reptiles' hard shells. Golden eagles have been observed to kill tortoises in the same way. Other live animals, up to nearly their own size, have been observed to be predaciously seized and dropped in flight. Among these are rock hyraxes, hares, marmots and, in one case, a 62 cm (24 in) long monitor lizard. Larger animals have been known to be attacked by bearded vultures, including ibex, Capra goats, Chamois and Steenbok. These animals have been killed by being surprised by the large birds and battered with wings until they fall off precipitous rocky edges to their deaths; although in some cases these may be accidental killings when both the vulture and the mammal surprise each other. Many large animals killed by bearded vultures are unsteady young, or have appeared sickly or obviously injured. Humans have been anecdotally reported to have been killed in the same way. However, this is unconfirmed and, if it does happen, most biologists who have studied the birds generally agreed it would be accidental on the part of the vulture. Occasionally smaller ground-dwelling birds, such as partridges and pigeons, have been reported eaten, possibly either as fresh carrion (which is usually ignored by these birds) or killed with beating wings by the vulture. While foraging for bones or live prey while in flight, bearded vultures fly fairly low over the rocky ground, staying around 2 to 4 m (6.6 to 13.1 ft) high. Occasionally, breeding pairs may forage and hunt together. In the Ethiopian Highlands, bearded vultures have adapted to living largely off human refuse.

The bearded vulture occupies an enormous territory year-around. It may forage over two square kilometers each day. The breeding period is variable, being December through September in Eurasia, November to June in the Indian subcontinent, October to May in Ethiopia, throughout the year in eastern Africa and May to January in southern Africa. Although generally solitary, the bond between a breeding pair is often considerably close. In a few cases, polyandry has been recorded in the species. The territorial and breeding display between bearded vultures is often spectacular, involving the showing of talons, tumbling and spiralling while in solo flight. The large birds also regularly lock feet with each other and fall some distance through the sky with each other. The nest is a massive pile of sticks, that goes from around 1 m (3.3 ft) across and 69 cm (27 in) deep when first constructed up to 2.5 m (8.2 ft) across and 1 m (3.3 ft) deep, with a covering of various animal matter from food, after repeated uses. The female usually lays a clutch of 1 to 2 eggs, though 3 have been recorded on rare occasions. which are incubated for 53 to 60 days. After hatching the young spend 100 to 130 days in the nest before fledging. The young may be dependent on the parents for up to 2 years, forcing the parents to nest in alternate years on a regular basis. Typically, the bearded vulture nests in caves and on ledges and rock outcrops or caves on steep rock walls, so are very difficult for nest-predating mammals to access. Wild bearded vultures have a mean lifespan of 21.4 years, but have been observed to live for up to at least 45 years in captivity. 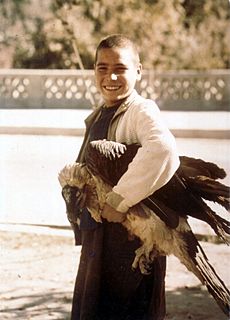 The bearded vulture is locally threatened. It naturally occurs at low densities, with anywhere from a dozen to 500 pairs now being found in each mountain range in Eurasia where the species breeds. The species is most common in Ethiopia, where an estimated 1,400 to 2,200 are believed to breed. Relatively large, healthy numbers seem to occur in some parts of the Himalayas as well. It was largely wiped out in Europe by the beginning of the 20th century, but has been locally reintroduced and is beginning to re-establish itself in protected areas. The bearded vulture has been successfully reintroduced to the Pyrenees of Spain (spreading into Portugal), and the Swiss and Italian Alps (with both populations spreading into France). They have also declined somewhat in parts of Asia and Africa, though less severely than in Europe. Declines today are usually due to poisons left out for carnivores, habitat degradation, the disturbances of nests, reduced food supplies and collisions with power lines. It was formerly persecuted in significant numbers because people feared (without justification) that it regularly carried off children and domestic animals; the bird was also hunted as a trophy. Despite the declines, the species clearly occupies a large range and, as such, it is listed as Near threatened on the IUCN Red List since the 24th of July 2014 . Probably fewer than 10,000 pairs exist in the wild worldwide.

All content from Kiddle encyclopedia articles (including the article images and facts) can be freely used under Attribution-ShareAlike license, unless stated otherwise. Cite this article:
Bearded vulture Facts for Kids. Kiddle Encyclopedia.