Bedford, a suburb of Leigh, Greater Manchester is one of three ancient townships, Bedford, Pennington and Westleigh, that merged in 1875 to form the town of Leigh. Historically, Bedford was in Lancashire.

Bedford means the "ford of Beda", which crossed the Pennington Brook, probably near Beaston Bridge on Warrington Road. It was recorded as Beneford in 1200–21 and Bedeford in 1200 and 1296.

The manor, held of the Botelers of Warrington, was divided before the time from which records survive. Bedford Hall never assumed the role of a manor house and was occupied by tenants of the Kighleys who were absentee landlords. In 1301 half of the manor was held by the Kighleys, a quarter by the Sales who lived at the moated Hopecarr Hall and the rest by John Waverton of Brick House. Thomas Shuttleworth lived at Sandypool which was taken from the Kighley share.

The area was rural and a small settlement grew at Butts where the road to Warrington branched from the Leigh to Manchester road. Several inns were built near the junction and in 1641 there was a shop selling "cheese, gunpowder, hops, tobacco and a variety of other goods". A corn mill was built by the Breaston Brook.

Agriculture, fustian weaving and mining from small coal pits near the Astley and Tyldesley border were the chief occupations until the Bridgewater Canal promoted the development of industry and rapid increases in population during the 19th century. Bedford Brewery was founded in 1823. Corn mills powered by steam were built at the canal basin by Butts Bridge in 1831 to process wheat imported from the prairies of America through the Port of Liverpool. Bickham and Pownall built a silk mill in Duke Street in 1833 and Richard le Mare, a French Huguenot immigrant, opened a silk weaving shed in Brewery Lane in 1859. After 1845 the Bedford Foundry made agricultural machinery and fire ranges in premises near the canal.

In 1858 the Fletchers built a private railway linking their collieries at Howe Bridge to Bedford Basin which the company built to facilitate the transport of coal. After the London and North Western Railway line was built in the north of the township, John Speakman sank Bedford Colliery where there was a disaster in 1886.

The township was crossed by four brooks from the north, west and east which united to the south of Bedford Hall to form the Glaze Brook forming part of the township's south western boundary. Astley and Bedford Mosses are a surviving part of Chat Moss where the elevation of the land is barely 50 feet above mean sea-level. The land rises gently to 125 feet on the northern boundary. The township had an area of 2,826 acres, and lay partly on the new red sandstone and to the north east on the middle coal measures of the Manchester Coalfield. There is alluvium in the ground crossed by the Glaze Brook and its tributaries. The soil is largely clay and the land consisted of meadow and pasture.

The mile-long Holden Road was constructed at a cost of £53,000 in 1923. In 1952 Leigh Borough Council began building a large council housing estate with facilities for 7,000 people at Higher Folds.

In 1864 the London and North Western Railway opened the Tyldesley Loopline from Manchester via Eccles and Tyldesley to Kenyon Junction on the Liverpool to Manchester Line via Leigh and Pennington. The station, originally named Bedford Leigh served the town. The railway crossed the town on a viaduct which has since been largely demolished. The station and railway closed in May 1969. 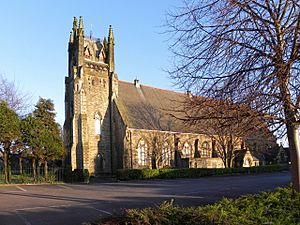 Recusants in Leigh adhered to the Catholic Church after the Reformation. They heard Mass in secret at Hopecarr, the home of the Sales or at Hall House where the Jesuit fathers of Culcheth and Southworth served from the late-17th century. In 1778, before the relaxation of the penal laws against recusants, a chapel was built and public worship resumed. The chapel, from which Chapel Street was named, was replaced on the same site by St Joseph's Church designed by Joseph Hansom in 1855.

St Thomas's Church was built in 1840 but was replaced in the early-20th century by a new church on the old site. The church is built of Accrington brick with Runcorn red sandstone facings, it was designed by J. S. Crowther. A mission church dedicated to All Saints was built on Manchester Road and consecrated on 29 October 1938 by the Bishop of Manchester.

All content from Kiddle encyclopedia articles (including the article images and facts) can be freely used under Attribution-ShareAlike license, unless stated otherwise. Cite this article:
Bedford, Greater Manchester Facts for Kids. Kiddle Encyclopedia.