Bee-eaters in Britain facts for kids

Two species of bee-eater have occurred as wild visitors to Britain, with a third species having occurred as an escape from captivity. 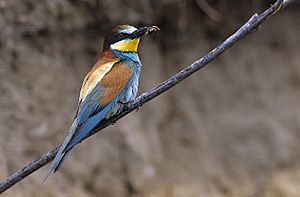 The European bee-eater occurs in Britain mainly as a spring overshoot. Until the late 20th century the species was a national rarity i.e. a species whose records are collected by the British Birds Rarities Committee. Increasing numbers meant that it was downgraded to a "scarce migrant" from 1991. Bee-eaters are occasionally seen in Britain in autumn, but are much scarcer at that season. The species has occasionally bred.

European bee-eaters have attempted to nest on six known occasions in Britain:

Eight sightings of the blue-cheeked bee-eater have been recorded. All individuals were adults, and all but one occurred in mid-summer.

One occurrence of the white-fronted bee-eater has been recorded, as an escape from captivity.

The northern carmine bee-eater has also occurred when one spent 24 May 2002 at Mundesley, Norfolk. No doubt of captive origin, it behaved in a wild manner and easily caught plenty of insects.

All content from Kiddle encyclopedia articles (including the article images and facts) can be freely used under Attribution-ShareAlike license, unless stated otherwise. Cite this article:
Bee-eaters in Britain Facts for Kids. Kiddle Encyclopedia.