The sandbar from St. Agnes to Gugh

St Agnes joins the island of Gugh by a tombolo, a kind of sandbar, called the Gugh Bar, which is exposed only at low tide. The Gugh is inhabited, with some three residents. The two islands of St Agnes and Gugh together have a population of 85 residents recorded in the 2011 census (73 were recorded in the 2001 census) and a landmass of 366 acres (148 ha). Without the Gugh included, St Agnes is marginally smaller than Bryher in either population or area; however if Gugh is included with St Agnes, it is Bryher that is marginally smaller in area and population.

In earlier times many men from St Agnes earned a living as pilots, guiding transatlantic liners and other vessels through the English Channel. Now the mainstay of the economy is tourism, together with some bulb farming. Accommodation is limited, and St Agnes is the only populated island in the Isles of Scilly which has no hotel. However, it has a few B&Bs and self-catering cottages, an ice cream shop, a campsite, a small post office and general store and a gift shop. It also has a pub (the Turk's Head) and a cafe, although these are closed in the winter.

The main population centre is in the north and middle of the island. The southern end of the island is covered by the heather moorland of Wingletang Down.

The island's most notable landmark is its lighthouse, which has been converted into living accommodation as the tower no longer contains a light. 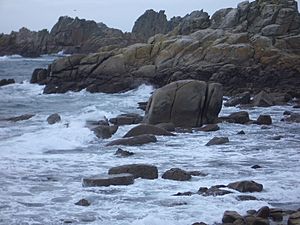 A rock formation on the southwest side of St. Agnes that looks like an elephant

Other landmarks include a standing stone known as the Nag's Head (probably a natural formation). In 1707, many of the sailors who had drowned in the great naval disaster off the Isles of Scilly were reputedly buried on the St Agnes playing field.

The Troytown Maze is said to have been laid out by the son of the lighthouse keeper in 1729, but may be much older. Although called a maze it is strictly a labyrinth with a convoluted path to the centre via seven rings. It is the only one outside Scandinavia made of beach pebbles, which may indicate it to be of Viking origin. References in the Norse sagas tell of raiders coming to Scilly as late as the mid-12th century. Any buried evidence of its origins may have been destroyed during an unofficial rebuild in 1988. 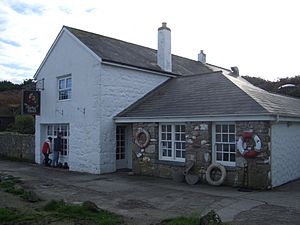 The Turk's Head, the only pub on St. Agnes

Friday evenings in the summer (end of April until start of October) see men's domestic Cornish Pilot Gig racing on Scilly, with the ladies' race on Wednesday. After the race, supporters fill the Turk's Head to discuss the race and to socialise. The pub is open through the summer, but during the winter it only opens on Wednesdays for a Pub quiz, and one other night. The pub is supplied from St Austell and stocks a range of beers and ales including Burton ales. 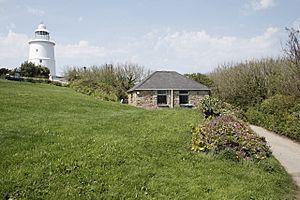 Five Islands Academy (previously Five Islands School) has its St Agnes Base, a primary campus. Secondary pupils board at the St Mary's main campus, staying there on weekdays and coming back and forth to their home islands on weekends.

Over one third of the area of St Agnes is designated as Sites of Special Scientific Interest (SSSI). In the south of the island Wingletang Down is noted for its heath, dune grassland and rocky coast and is the only site in Britain where the fern least adder's–tongue (Ophioglossum lusitanicum) grows. Other rare plants include the orchid autumn lady's-tresses (Spiranthes spiralis) and early meadow-grass (Poa infirma). The only freshwater pools on St Agnes are Big Pool and Little Pool in the north-west of the island which are part of the Big Pool and Browarth Point SSSI. Big Pool shows evidence for inundation by the 1775 Lisbon tsunami that was caused by the 1755 Lisbon earthquake. The vegetation has some brackish influence because of occasional influx of the sea during winter storms with rushes such as saltmarsh rush (Juncus gerardi) and sea club–rush (Scirpus maritimus). The surrounding grassland, which is also a cricket pitch, is notable for the clovers amongst its flora including western clover (Trifolium occidentale), suffocated clover (T. suffocatum) and subterranean clover (T. subterraneum). Other plants include adder's-tongue (Ophioglossum vulgatum) and small adder's-tongue (O. azoricum).

St Agnes is visited by birdwatchers, particularly during the ″Scilly season″ of September and October. Among the many vagrant birds which have been found here around this time are the following, which were all ″firsts″ for Britain:

Among rare vagrants recorded at other times of year are the following: 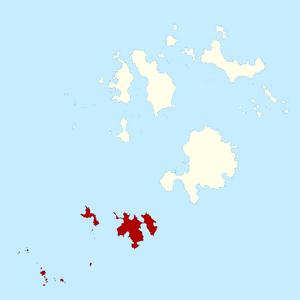 The isles of Scilly comprising the civil parish and ward of St Agnes shown in red.

St Agnes is one of the five civil parishes of the Isles of Scilly, which are also wards. The civil parish and ward include Gugh and several uninhabited islands and rocks, including the Western Rocks, Annet, Rosevear, Pednathise Head (the southernmost land in the UK) and the Bishop Rock. St Agnes returns one councillor to the Council of the Isles of Scilly, the same as the other "off-island" wards. The civil parish is not functional however, and there is no council or meeting.

All content from Kiddle encyclopedia articles (including the article images and facts) can be freely used under Attribution-ShareAlike license, unless stated otherwise. Cite this article:
St Agnes, Isles of Scilly Facts for Kids. Kiddle Encyclopedia.