Beguildy (Welsh: Bugeildy) is a village and community in Powys, Wales.

The village has a pub, the Radnorshire Arms, a post office, and a place of worship. Beguildy Church in Wales Primary School closed in 2013.

The large, rural community of Beguildy includes the settlements of Beguildy, Felindre, Dutlas, Lloyney, Heyope and Knucklas. It falls in the historic county of Radnorshire. An electoral ward in the same name exists. At the 2011 Census this ward had a population of 1,411.

Beguildy Castle is a Norman motte-and-bailey castle of which the well preserved 20 foot high motte and earthworks remain. The village and the castle lie on the border between England and Wales. 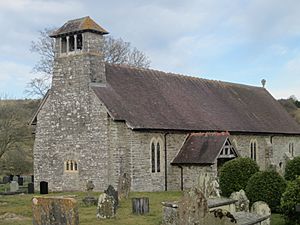 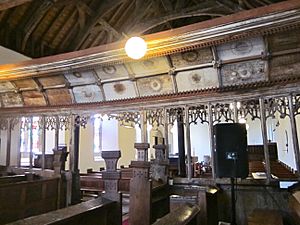 The church, which is mainly 14th century, was restored considerably in the 19th century, with the chancel being rebuilt in 1885 and the nave restored in 1896 (to the design by William Radford Bryden). The original tower collapsed in the 19th century and bells, which date from 1661 and 1664, were re-hung in their present position in 1936.

The church features a 14th-century octagonal font (which reputed to carry marks made by Cromwell's troops sharpening their swords), a holy water stoup at the south door and a priests door in the south wall. The rood screen is a fine example of 15th century workmanship and is well preserved, bearing the original coloured Tudor roses. Probably from the same period are two oak benches. The dug out parish chest, which was reputedly hewn out of a solid block of timber, is an ancient churchwarden's chest and probably dates form the 13th century. At the end of the chest is an iron ring for use when it was drawn by a horse to be buried or hidden in times of trouble. One part of the chest would have held the church valuables and the other the churchwardens treasures. Each compartment was locked separately. The church is well endowed with 20th-century stained glass windows.

John Dee has probably been incorrectly associated with Beguildy. He served at the court of Elizabeth I as the royal tutor in mathematics. He later became the Queen's Ambassador to Poland but is remembered as a distinguished early scientist and astronomer. He was reputedly a descendant of Rhodri Mawr, King of Wales.

All content from Kiddle encyclopedia articles (including the article images and facts) can be freely used under Attribution-ShareAlike license, unless stated otherwise. Cite this article:
Beguildy Facts for Kids. Kiddle Encyclopedia.