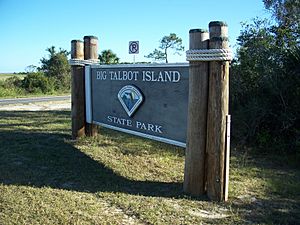 The park is a nature preserve and a location for nature study, bird-watching, or photography. Other activities include hiking, bicycling, fishing, boating, canoeing, kayaking, and picnicking. Amenities include picnic pavilions, nature trails, a fishing pier, a boat ramp, bike trails and beaches. The park is open from 8:00 am till sundown year round.

The coastal landscape and beach at Big Talbot Island is unique within the state of Florida for its rock-like sedimentary hardpan soil deposits underlying the surface. Where these formations are exposed in the shallow waters surrounded the island they provide habitat for molluscs, crabs, oysters, and other tide pool creatures. The formations and sand on Blackrock Beach are much darker in contrast to the coquina formations at Washington Oaks State Gardens, about 60 miles southward on the coastal highway A1A, and the limestone outcroppings at Blowing Rocks Preserve over 250 miles further south. The beach can be accessed through the park entrance or through the trailhead parking area adjacent to the Blackrock Trail. At the end of the Blackrock Trail is Boneyard Beach. Here, skeletons of oaks sit along the shoreline. Big Talbot's Boneyard Beach is not recommended for swimming but is popular with photographers.

Big Talbot and Little Talbot are two of only a few remaining undeveloped barrier islands within Florida. They were first inhabited by a Native American group called the Timucua. Beginning with the arrival of the French in 1562, France, England, and Spain claimed the islands as colonial territory. In 1735, General James Oglethorpe named the Talbot Islands in honor of Charles Talbot, Lord High Chancellor of Great Britain. Along with the bordering Timucuan Ecological and Historic Preserve, the islands are representative of several ecosystems and support a number of diverse natural habitats abundant with wildlife.

All content from Kiddle encyclopedia articles (including the article images and facts) can be freely used under Attribution-ShareAlike license, unless stated otherwise. Cite this article:
Big Talbot Island State Park Facts for Kids. Kiddle Encyclopedia.