Black Rock is a neighborhood in the southwestern section of the city of Bridgeport, Connecticut. It was part of the Town of Fairfield before the State of Connecticut granted the land to Bridgeport. It borders Fairfield and the Ash Creek tidal estuary on the west, the West Side/West End of Bridgeport on the north and east, and Black Rock Harbor and Long Island Sound on the south.

The Black Rock neighborhood has a mix of residential and commercial properties, with most of the retail stores being located along Fairfield Avenue, the main thoroughfare, which connects Black Rock to Fairfield and downtown Bridgeport. Fairfield Avenue is in a state of transition with older businesses being replaced by upscale restaurants, cafes, espresso bars, gourmet ice cream shops, and art galleries. The Black Rock Branch Library renovation and expansion were completed in 2009. The library has been expanded from its original 6,000 square feet (560 m2) to 11,000 square feet (1,000 m2). Additionally, the entire facility has been modernized, with the installation of 12 public access computers, free Wi-Fi throughout the building and the construction of two large program rooms and a smaller conference room. The library is also fully accessible to persons with disabilities.

The residential areas lie on either side of Fairfield Avenue with less density closer to the waterfront. The area of least density is a section called St. Mary's-by-the-Sea and consists of Resident AA zoned properties which require a minimum lot of 11,250 SF, although most lots are larger than the minimum. Grovers Hill is the highest elevation in Black Rock and some of the most expensive properties in Black Rock are located on this hill with views of Long Island Sound. There are also direct waterfront properties, including two condominium complexes on the Sound and two on the Ash Creek tidal estuary. St. Mary's-by-the-Sea also has a 9-acre (36,000 m2) public park along the Sound with half a mile of sidewalks and an area for bird watching.

Black Rock was settled about the same time as Fairfield, which was many years before Brigeport even existed. As Bridgeport grew to be the largest city in Connecticut, Black Rock was absorbed into its city limits.

Early Map of Fairfield and Black Rock - Before the settlement of Bridgeport.

Before Black Rock was incorporated into Bridgeport, there was also the community of Stratfield which has also been absorbed into modern Bridgeport. Stratfield was originally known as Pequonnock and was located about midway between Black Rock and the original settlement of Bridgeport. The cemetery known as Stratfield Burying Place is located here and has many of Black Rock's early settlers interred there.

There are two historic districts in the neighborhood that have been listed on the National Register of Historic Places. One was listed in 1979 and includes houses and other structures. The district is known as Black Rock Historic District. The other is Black Rock Gardens Historic District. It has 12 buildings built for workers during World War I.

Black Rock attracts artists, academics, young professionals, and retirees who desire to live in an affordable waterfront community on Long Island Sound. This Fairfield County community has been the focus of three articles by the New York Times over the past few years, "Living in St Mary's-by-the-Sea, Connecticut: The Saltwater Smell Means You're Home" (May 23, 2010), “Living in Black Rock, Connecticut: A Community with Spirit and an Edge” (August 8, 2004) and “If You’re Thinking of Living In St. Mary’s-by-the-Sea, Connecticut: At Peninsula’s End, a Waterside Enclave” (June 9, 2002). 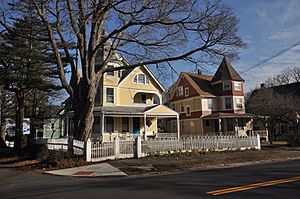 Black Rock has a rich history dating back to its heritage as a colonial seaport. In the late 19th century and early 20th century wealthy merchants built beautiful homes in Black Rock. One of these homes with 3 acres (12,000 m2) of land and 16 rooms "("The Chimneys") is located on Old Battery Road. Old Battery Road is located on Grovers Hill, one of the highest elevations in Black Rock, which also affords views of the Sound. Grovers Avenue, Penfield Place, Beacon Street, and Anchorage Drive are also have direct waterfront properties and deep water docks.

Fairfield Avenue is Black Rock's primary artery. Black Rock is also accessible from exits 24 and 25 on I-95 and from Route 1, both of which run just north of the area. Black Rock is served by a train station on Metro-North's New Haven Line, located just across Ash Creek in Fairfield called "Fairfield Metro Center" which opened in December 2011.

The Black Rock Community Council (BRCC), founded in 1976, is the oldest and largest community membership organization in the area. The Council’s mission is to promote projects that will enhance the quality of life of Black Rock’s residents and businesses, including recreational, educational, and business development initiatives. Some of the Council’s activities include:

Fairfield Avenue in the Black Rock is going through significant revitalization which includes restaurants like Fire Engine Pizza Company and Walrus and Carpenter, art galleries, and a new library with WI-FI capabilities. The neighborhood's nearby waterfront, the location of the commercial corridor and the new commuter rail station have all had a positive effect on the area.

Black Rock has an overall moderate climate, the average January temperature is around 23 degrees (F) and the average high in July is 82 degrees (F). Black rock has in the past been hit with a number of large winter snow storms. Although the average snowfall is 29", the following is the list of top snow-accumulating winters (October 1 - April 30):

All content from Kiddle encyclopedia articles (including the article images and facts) can be freely used under Attribution-ShareAlike license, unless stated otherwise. Cite this article:
Black Rock, Bridgeport Facts for Kids. Kiddle Encyclopedia.