The Bloody Creek structure was discovered by Dr. George R. Stevens, a retired geologist from Acadia University, in 1987 during a regional air photo survey. By the time of its discovery, it had been submerged beneath a reservoir, Dalhousie Lake. Dalhousie Lake was created by a dam constructed across Bloody Creek by the Nova Scotia Power Corporation as part of the Bloody Creek Reservoir hydroelectric development. As a result, the collection of rock samples from crater rim and its surroundings required the use of scuba gear and visiting the site during the occasional periods when the reservoir was drained. When the surface of Dalhousie Lake was frozen, the thick ice created a platform that greatly facilitated magnetometer and ground-penetrating radar surveys of this feature. Prior to being flooded, the interior of the Bloody Creek structure consisted of a fen within the floodplain of Bloody Creek.

The Bloody Creek structure lies within the Southern Upland of southwestern Nova Scotia. The Southern Upland consists of poorly drained, gently-rolling, hilly topography that is characterized by glacially deranged drainages and extensive lakes and wetlands. A large granite batholith, which has intruded slate and greywacke, underlies the Southern Uplands. Within this region, bedrock is poorly exposed as the result of low relief; a widespread surficial blanket of glacial till; and numerous large depressions filled with either wetland peat or occupied by lakes. The blanket of glacial till is relatively thin, typically less than 5 meters (16 ft) thick, and consists of loose sandy sediment that contains an abundance of locally derived angular cobbles and boulders. The exposed bedrock has been glacially sculpted and polished. At the site of the Bloody Creek structure and elsewhere in the region, roches moutonnées and lee-side plucking features can be seen.

The Bloody Creek structure lies entirely within deeply eroded outcrops of granitic rock of the Scrag Lake pluton. This pluton has an exposed area of approximately 2,460 km2 (950 sq mi). It forms much of the western end of the South Mountain Batholith. The pluton is composed primarily of megacrystic biotite monzogranite and lesser amounts of megacrystic biotite granodiorite. Contacts between the primary biotite monzogranite and the slates and greywackes of the host rocks are ubiquitously sharp and intrusive. Numerous small bodies (<1–2 km2 (0.39–0.77 sq mi)) of fine-grained leucomonzogranite, which constitute less than 0.1% of the total pluton, are scattered throughout it. The plutons of the South Mountain Batholith are estimated to have been emplaced at depths of 6–10 kilometers (3.7–6.2 mi). 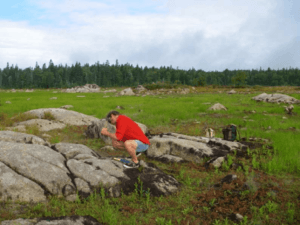 Acadia University technician Don Osburn sampling rocks near the rim of the crater for evidence of impact shock features.

The Bloody Creek structure is slightly elliptical in shape with a 420 meters (1,380 ft) long northwest-trending major axis and a 350 meters (1,150 ft) long southwest-trending minor axis. As seen in aerial photographs taken before Bloody Creek was flooded, the crater of this structure is defined by a continuous and prominent scarp that is 1 to 2 meters (3.3 to 6.6 ft) high and completely encircles what once a flat, fen. Approximately 10 meters (33 ft) of peat and lake sediments underlies the surface of the former fen. These sediments rest on a bedrock surface of irregular relief that is bisected by a southwest-trending ridge. 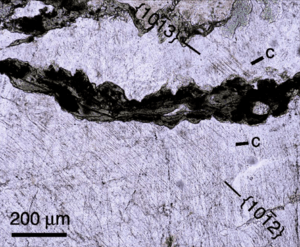 A photomicrograph of the granitic rock near the crater. The parallel lines throughout the thin section are diagnostic of shock metamorphism

Petrographic analysis using thin sections of samples collected proximal to the geomorphic rim of the Bloody Creek structure provide abundance evidence of shock metamorphism that is indicative of a hypervelocity impact associated with this structure. This evidence includes microbrecciation and cataclasis, kink-banding and rare planar microstructures in feldspar, reduced mineral birefringence, common mosaicism and planar microstructures in quartz, kink-banding in mica, and systematic degradation of biotite to chlorite showing plastic deformation and flow microtextures. The planar microstructures consist of rare planar fractures and possible planar deformation features. Of these features, the planar deformation features, known as shocked quartz, are considered uniquely diagnostic of shock metamorphism that was the result of an extraterrestrial impact.

The age of the Bloody Creek structure remains unanswered. In one case, the Bloody Creek structure might be a deeply eroded impact structure. This structure being relatively old and heavily eroded, presumably in part by Pleistocene glaciers, would explain both the anomalously low depth to diameter ratio of the crater structure and the anomalously high threshold pressures indicated by shocked quartz and other alteration features of the rock comprising its current rim. In such a case, the rock exposed at the surface would be the eroded base of a much larger original structure. This hypothesis is consistent with the extremely shallow depth-diameter ratio of the structure. In such a case, the sample sites would have initially been close to the bottom of the original crater and have experienced the high shock pressures indicated by the types of shocked quartz found in them. In addition, this hypothesis might also explain the lack of an obvious breccia lens that can be seen on the ground-penetrating radar profiles from inside the crater.

Alternatively, the Bloody Creek structure might be a well-preserved, uneroded, and relatively young impact crater. The anomalous morphometry of such an impact crater might be explained by an impact onto glacial ice, which may have resulted in the dissipation of much of the impact energy into the ice, resulting in the low depth to diameter ratio of the crater. This hypothesis might also explain similarities in the rate of accumulation of peat within the Bloody Creek structure and within nearby bogs with well-constrained ages that indicate this crater formed prior to deglaciation, which was about 12 thousand years ago. What is known about the stratigraphy of the peat layers from ground-penetrating radar profiles suggests that differential subsidence and compaction inside the crater may be continuing. If so, this would be another indication of a relatively young impact structure.

During the investigations of the Bloody Creek structure, a cluster of discontinuous arcuate scarps were found about 1 kilometer (0.62 mi) north of it. These arcuate scarps are known as the North Group. The analysis of aerial photography found that it consists of several discontinuous arcuate scarps that are 1 to 2 meters (3.3 to 6.6 ft) high and sharply outline depressions with relatively flat, inner floors. Sonar and lake sediment probing of a few of these structures, which are now submerged beneath Dalhousie Lake, revealed the presence of crater-like features, which underlie these floors and are inferred to be buried by lake sediment and peat. Petrographic analysis of bedrock samples collected near the eastern rim crests of the North Group identified features that are suggestive of shock metamorphism. These features include kink-bands in feldspar and biotite and planar microstructures in quartz and feldspar. The planar microstructures consist of planar fractures in both quartz and feldspar and possible planar deformation features in quartz.

All content from Kiddle encyclopedia articles (including the article images and facts) can be freely used under Attribution-ShareAlike license, unless stated otherwise. Cite this article:
Bloody Creek crater Facts for Kids. Kiddle Encyclopedia.