The blue-winged warbler (Vermivora cyanoptera) is a fairly common New World warbler, 11.5 cm (4.5 in) long and weighing 8.5 g (0.30 oz). It breeds in eastern North America in southern Ontario and the eastern United States. Its range is extending northwards, where it is replacing the very closely related golden-winged warbler, Vermivora chrysoptera.

The common name blue-winged warbler refers to the bluish-gray color of the wings that contrast with the bright yellow body of the male. The name of the genus Vermivora means "worm-eating". The genus used to include nine other new world warblers but now includes only the golden-winged warbler and Bachman's warbler which is believed to be extinct. 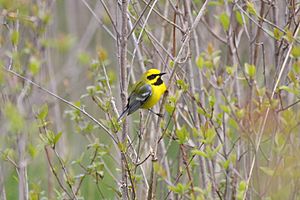 The blue-winged and golden-winged warblers are often compared to one another. Originally, the blue-winged warbler evolved on the western side of the country, while the golden-winged species bred closer to the Atlantic coast. However, in the recent years, their habitats have drastically changed due to urbanization, deforestation, and other factors. 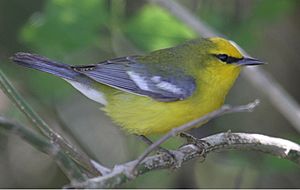 The blue-winged warbler is a small warbler at 11.4–12.7 cm (4.5–5.0 in) long, with a wingspan of 17–19.5 cm (6.7–7.7 in). The breeding plumage of the male consists of a bright yellow head, breast and underparts. There is no streaking of the underparts of the bird. It has a narrow black line though the eyes and light blueish gray with two white wing-bars, which are diagnostic field marks. The blue winged warblers are generally small in size with a well-proportioned body, and heavy pointed bill. They roughly measure 4.3 to 4.7 inches long with a wingspan of around 5.9 inches. An average Blue-Winged Warbler weighs around 0.3 oz.

The female is duller overall with less yellow on the crown. Immatures are olive green with wings similar to the adults.

The color of their plumage tends to vary depending on the sex of the species. For males, the feathers are of bright yellow and olive green. The males often have bluish-gray wings that come with white wing bars and a distinctive black eye lining, making their heads look pointier compared to other male warbler species.

Blue-Winged Warbler females exhibit a yellow plumage that looks a bit lighter in color. The females also have a much less prominent eye lining which mostly looks grey and light, rather than black as seen in the males.

Immature or juvenile Blue-Winged Warblers are smaller compared to adults and will show a pinkish bill and almost invisible wing bars.

The song is a series of buzzing notes. The call is a sharp chip.

Blue-winged warblers are migratory New World warblers. They winter in southern Central America and breed from east-central Nebraska in the west to southern Minnesota, Wisconsin, Michigan and southern Ontario in the north to central New York, southern Vermont, southern New Hampshire and New England to the east, south to western South Carolina, northern Georgia, northern Alabama, eastern Tennessee and southern Missouri. It is a very rare vagrant to western Europe, with one bird wandering to Ireland.

The breeding habitat is open scrubby areas. The species is widely distributed in North America, with populations found in states such as North Carolina, South Carolina, Connecticut, Florida, Kentucky, Massachusetts, Michigan, New York, and Ohio. They’re mostly found in abandoned fields with shrubs and trees and bordered by tall deciduous trees. The Blue-Winged Warblers are generally found in areas located in higher elevation and high percentage of grass and canopy cover.

Diet consists of insects, and spiders. Blue-Winged Warblers primarily feed on insects found in various plants including apple trees, walnut trees, and water hemlock. Adults sometimes hang upside down to glean and probe leaves and gather insect larvae for their young. Some examples of larvae fed to juvenile Blue-Winged Warblers include Aphis sp., and Corythucha sp. Often, researchers presume that the species's diet and feeding methods tend to differ on each season and habitat, and may also change due to the availability of resources. This could be considered a relatively generalist species.

Blue-winged warblers nest on the ground or low in a bush, laying four to seven eggs in a cup nest. The females incubate the eggs for 10–11 days. The young are altricial and fledge in 8–10 days. The blue winged species communicate with others via singing. Hence, they have songs for fighting (descending bee-buzz), nesting, as well as breeding with other Blue-Winged Warblers. During breeding season, the males arrive first in the location and wait for their possible mate. Usually, the females arrive one week after the males. While waiting for their mates, the males sing continuously. Once the females enter, the singing decreases and could possibly change in tune until they find a partner. After mating, the length of their song abruptly decreases.

All content from Kiddle encyclopedia articles (including the article images and facts) can be freely used under Attribution-ShareAlike license, unless stated otherwise. Cite this article:
Blue-winged warbler Facts for Kids. Kiddle Encyclopedia.