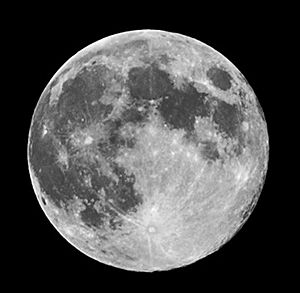 A blue moon is an additional full moon that appears in a subdivision of a year: either the third of four full moons in a season, or a second full moon in a month of the common calendar.

The phrase in modern usage has nothing to do with the actual color of the Moon, although a visually blue Moon (the Moon appearing with a bluish tinge) may occur under certain atmospheric conditions—for instance, if volcanic eruptions or fires release particles in the atmosphere of just the right size to preferentially scatter red light.

The term "blue moon" arose from folklore, the "blue" replacing the no-longer-understood belewe, 'to betray'. The original meaning was "betrayer moon", referring to a full moon that would "normally" (in years without a blue moon) be the full moon of spring, while in an "blue moon year", it was "traitorous" in the sense that people had to continue fasting for another month in accordance with the season of Lent.

All content from Kiddle encyclopedia articles (including the article images and facts) can be freely used under Attribution-ShareAlike license, unless stated otherwise. Cite this article:
Blue moon Facts for Kids. Kiddle Encyclopedia.