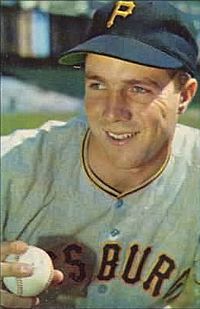 Robert Bartmess Friend (November 24, 1930 – February 3, 2019) was an American right-handed starting pitcher in Major League Baseball. He pitched mainly for the Pittsburgh Pirates from 1951 to 1965. He also played for the New York Yankees and New York Mets in his final season of 1966. He is the first man ever to have led the league in ERA while pitching for a last place team.

Friend was born in Lafayette, Indiana. He studied at Purdue University. Friend died suddenly in his sleep at his home in Pittsburgh, Pennsylvania on February 3, 2019 from cardiac arrest at the age of 88.

All content from Kiddle encyclopedia articles (including the article images and facts) can be freely used under Attribution-ShareAlike license, unless stated otherwise. Cite this article:
Bob Friend Facts for Kids. Kiddle Encyclopedia.