Bordon is a town in the East Hampshire district of Hampshire, England. It lies in the interior of the royal Woolmer Forest, about 5.4 miles (8.7 km) southeast of Alton. The town forms a part of the civil parish of Whitehill which is one of two contiguous villages, the other being Lindford. The civil parish is on the A325, and near the A3 road between London and Portsmouth, from which it is buffered by the rise of the wooded Woolmer Ranges. Bordon is twinned with Condé-sur-Vire in Normandy, France.

Unlike its nearest towns, Petersfield, Farnham and Alton, Bordon has not been a market town, having developed as a military area. Many of the facilities are on or near the A325, a former toll road (turnpike) that connects Farnham to the A3 to its south. Local facilities include The Phoenix Theatre and Mill Chase Leisure Centre.

Unlike the neighbouring towns of Petersfield, Farnham and Alton, it has not been a market town. Many of the facilities are situated on or near the A325, a former toll road that connects Farnham to the A3 to its south. There are primary and secondary education facilities including Mill Chase Academy. The town has Hollywater School, a Special Education establishment. Other local facilities include The Phoenix Theatre, Mill Chase Leisure Centre, and Forest Community Cinema. 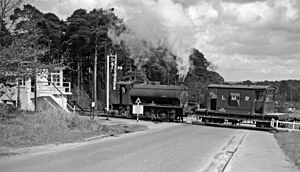 The town has been an army base with its own railway station. Bordon camp was first laid out in 1899 by the Highland Light Infantry, directed by Royal Engineers, and following interruption by the Second Boer War, was occupied by the army from 1903. The first occupants of Quebec barracks were the Somersetshire Light Infantry, returning from South Africa in April, and the 2nd Battalion Devonshire Regiment arrived at St. Lucia Barracks from South Africa in June. Bordon Camp was home to the Canadian Army during both of the world wars and the town is dotted with concrete slabs on which tanks and armoured cars were parked. Bordon is home to the Royal Electrical and Mechanical Engineers (REME), providing trade training, both basic and supplementary, to its soldiers, supported by the School of Electrical and Mechanical Engineers (SEME). The Longmoor Army Ranges, a forest firing range, is south of the town. Bordon railway station was linked to both the main railway network, and by light railway to the Longmoor Military Railway.

In 2009, Bordon was announced as the site of a future Eco-town as part of a scheme put in place by the Labour Party. This, in addition to the Town Council's own 'Green Town Vision', would see the development of Whitehill Bordon as a carbon-neutral town with sustainable housing and business facilities. The existing Green Town Vision aimed to ensure that all new development of the town would by beneficial to the local environment, and the Eco-town scheme would provide the necessary support and funding to allow sustainable regeneration of the area. The proposal initially included provisions for 5000 new homes, along with supporting infrastructure, which would require extensive use of greenfield land, as well as areas reclaimed during the withdrawal of the military presence in the town.

Although the scheme was supported by the local authority, some local residents expressed concerns over the inflation of the town, naming the road and transport network as an area of concern. Other concerns raised include sharp increase in residents, and the lack of infrastructure to facilitate them. After the announcement of the Eco-town plan, a group of residents formed the Bordon Area Action Group, and opposed the scheme. They argued that the development failed sustainability tests, and claimed that consultation was rigged. However, other residents supported the scheme, and consultation is ongoing. After the election of the coalition government in 2010, the future of the Eco-town scheme became unclear. Funding was cut by half, and support from the government was significantly reduced. However, the project continued, and eco-town projects that have already been awarded funding, such as free internet, have been implemented. The Whitehill & Bordon Masterplan was finalised in 2012.

The nearest railway station is 4 miles (6.4 km) south-east in Liphook, which is on the Portsmouth Direct Line. The town had its own station on the Bordon Light Railway, which was closed in 1966. In 2009, the Association of Train Operating Companies proposed reinstating a rail link with the town, and a feasibility study, concluded in February 2012, was undertaken. The outcome was a plausible link to the existing Alton Line at Bentley, Hampshire, with an estimated cost of £170m.

Bordon and Whitehill are on the A325, which links them to the A3, which passes through the parish, and to Farnham. The town is served by Stagecoach South bus routes. A Tesco-funded bus service around the town ceased due to muted investment.

In November 2019, Mill Chase Academy closed after 60 years, being replaced by Oakmoor School.

All content from Kiddle encyclopedia articles (including the article images and facts) can be freely used under Attribution-ShareAlike license, unless stated otherwise. Cite this article:
Bordon Facts for Kids. Kiddle Encyclopedia.