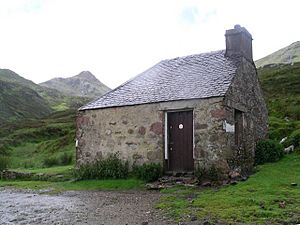 A bothy is a basic shelter, usually left unlocked and available for anyone to use free of charge. It was also a term for basic accommodation, usually for gardeners or other workers on an estate. Bothies are found in remote mountainous areas of Scotland, Northern England, Northern Ireland, Wales and the Isle of Man. They are particularly common in the Scottish Highlands, but related buildings can be found around the world (for example, in the Nordic countries there are wilderness huts). A bothy was also a semi-legal drinking den in the Isle of Lewis. These, such as Bothan Eòrapaidh, were used until recent years as gathering points for local men and were often situated in an old hut or caravan.

The etymology of the word bothy is uncertain. Suggestions include a relation to both "hut" as in Irish bothán and Scottish Gaelic bothan or bothag; a corruption of the Welsh term bwthyn, also meaning small cottage; and a derivation from Norse būð, cognate with English booth with a diminutive ending.

Most bothies are ruined buildings which have been restored to a basic standard, providing a windproof and watertight shelter. They vary in size from little more than a large box up to two-storey cottages. They usually have designated sleeping areas, which commonly are either an upstairs room or a raised platform, thus allowing one to keep clear of cold air and draughts at floor height. No bedding, mattresses or blankets are provided. Public access to bothies is either on foot, by bicycle or boat.

Most bothies have a fireplace and are near a natural source of water. A spade may be provided to bury excrement. 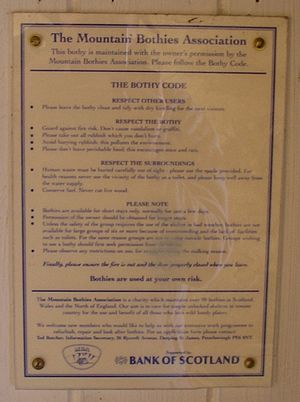 The Bothy Code, seen at the 'Tarf Hotel' Bothy, Perth and Kinross

There are thousands of examples to draw from. A typical Scottish bothy is the Salmon Fisherman's Bothy, Newtonhill, which is perched above the Burn of Elsick near its mouth at the North Sea. Another Scottish example from the peak of the salmon fishing in the 1890s is the fisherman's bothy at the mouth of the Burn of Muchalls. A further example is the Lairig Leacach Bothy in Lochaber, not far to the east of Fort William.

The best-known estate bothy is the one in the Royal Gardens at Windsor Castle, which could house about 25 people. It was used by the improver gardeners and disabled ex-servicemen who worked on the estate. Most reasonably-sized estates had a bothy, which housed single men only; in fact, if they got married, they had to give up the accommodation in the bothy. The most famous person to live in a bothy of this type was Percy Thrower when he worked in the Royal gardens. Another example of an estate bothy is the one at Horwood House, which held just five men. There is also one at Attingham Park which is being restored along with the walled gardens.

Because they are freely available to all, the continued existence of bothies relies on users helping look after them. Over the years, the Mountain Bothies Association has developed a Bothy Code that sets out the main points users should respect:

Bothies are usually owned by the landowner of the estate on which they stand, although the actual owner is rarely involved in any way, other than by permitting their continued existence, and by helping with transport of materials. Many are maintained by volunteers from the Mountain Bothies Association (MBA), a charity that looks after 97 bothies in Scotland, the north of England, and Wales.

The location of these bothies can be found on the MBA website, along with information on how people can help.

All content from Kiddle encyclopedia articles (including the article images and facts) can be freely used under Attribution-ShareAlike license, unless stated otherwise. Cite this article:
Bothy Facts for Kids. Kiddle Encyclopedia.