Kids Encyclopedia Facts
not to be confused with Bottesford, Leicestershire

Bottesford is a small town and civil parish in North Lincolnshire, England.

The town is joined to southern Scunthorpe, and is defined by the B1501 road to the north and Bottesford Beck to the south. The River Trent lies to the west, with a boundary line approximately along Grammar School Walk, Richmond Close and Winchester Drive to the east. Bottesford parish includes the hamlet of Yaddlethorpe, and Bottesford Moor.

The Grade I listed Anglican parish church is dedicated to St. Peter ad Vincula. The church is Early English style and cruciform in plan, built on the site of an earlier Saxon church. It was restored in 1870; during restoration were found two Saxon sundials that were incorporated into the south porch. Queen Elizabeth II visited the parish on her Golden Jubilee tour in July 2002.

Local landmarks include Bottesford Beck, and Bottesford Preceptory where it is said that the Knight's Templar and later Knights of St John made a base.

Until their disbandment in 1312, the Knights Templar were major landowners on the higher lands of Lincolnshire, where they had a number of preceptories on property which provided income, while Temple Bruer was an estate on the Lincoln Heath, believed to have been used also for military training. The preceptories from which the Lincolnshire properties were managed were: 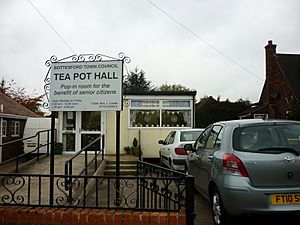 Tea Pot Hall – formerly a meeting place for the elderly, since relocated.

There is a library and medical centre on Cambridge Avenue.

There are two Junior schools, Bottesford Junior, and Leys Farm Junior School. There is also one Primary school, Holme Valley Primary, on Timberland.

The local secondary school, the Frederick Gough School, opened in 1960 as Ashby Grammar School. It became Bottesford Grammar School, then Frederick Gough Grammar School named after the first chairman of the school governors. It became comprehensive in 1969 when it joined with Ashby Girls' Secondary School, a secondary modern school on Ashby High Street. Other students travel to the nearby Melior Community Academy in Scunthorpe which has special links to the Leys Farm junior school.

The ecclesiastical parish is Bottesford St Peters part of the Bottesford with Ashby Team Ministry of the Deanery of Manlake. The team vicar is The Revd Graham Lines. Whilst the two Methodist chapels recorded in 1872 have closed, in 2002 a new Baptist church was opened in Chancel Road, having been meeting in the Civic Hall since 1978.

A civic hall is run by the Town Council for social events. A sports hall stands adjacent to the football and cricket pitches in Birch Park.

All content from Kiddle encyclopedia articles (including the article images and facts) can be freely used under Attribution-ShareAlike license, unless stated otherwise. Cite this article:
Bottesford, Lincolnshire Facts for Kids. Kiddle Encyclopedia.