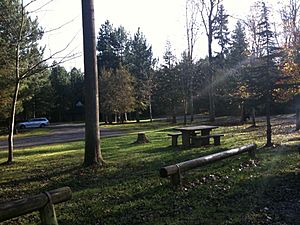 The carpark at Bourne Woods.

The ridge of Jurassic land which lies to the west of Bourne in Lincolnshire, England, overlooks the town and the reclaimed fens to its east. This statement should not however, be allowed to give an impression of great altitude. This is a region of very gentle relief. The fen edge is at an altitude of about seven metres and 2½ kilometres away, the highest ground in the wood is at about 58 metres. The Jurassic beds (clay and sandy clay) are capped by glacial till or boulder clay, left from glaciations that occurred in the British Isles during the Anglian and Wolstonian stages respectively1. In former times, this till made the land too difficult for the early farmers to use as arable land and too wet and tenacious to be ideal for pasture. It is natural therefore, to find that much of it has been left as woodland, which was in itself, a valuable resource for fuel and constructional material. As far south as Bourne though, the remaining strip of glacial till is narrow and most of Bourne wood is on the Jurassic Kellaways clay and sand.

On the ridge and on the margin of the parish, the wood was conveniently placed so that heavy loads of timber were brought down the gentle slope to supply the rest of the parish. Also, it lay beyond the fields where the daily labour of ploughing, weeding and harvest required frequent attendance from the houses of the town. Going for wood was an important job; part of the initial endowment of Bourne Abbey was "two big faggots, such as might be carried on the back, of the larger branches, to be taken every day out of Bourne Wood without interference". Fetching timber was important but done less frequently than sod-breaking, crow scaring, weeding, ploughing, harrowing, sowing, reaping, stooking, straw-carting and pasturing in the stubble of the arable fields.

Bourne Wood lies to the east of the crest of the ridge while the adjoining wood, Pillar Wood, belongs to the neighbouring parish of Edenham which it served in a similar way on the western side of the ridge. There are several woods around Bourne Wood, in different parishes or former parishes, fitting this pattern. Taken together, they may loosely be called Bourne Woods but the name is in reality, singular. Each wood has its name and Bourne Wood is one of them.

There are some woods in the district which are secondary. For example, Elsea Wood at Northorpe (Grid Ref. TF097184), through which the line of the Roman road, King Street runs towards Bourne, from the south, is entirely on the Roman carriageway and verges so will be Post-Roman. However, Bourne Wood appears in part at least, to be primary, a relict of the wildwood, which developed naturally as the climate warmed after the latest glacial period. Traces of the shore of the lake, which was dammed into the Fenland basin by the ice cap, can still be seen in the wood. This glacial is known in Britain as the Devensian but elsewhere, goes under names such as Vistula, Weichsellian, Würm and Wisconsinan.

Plant species which indicate this continuity, such as yellow archangel (Lamiastrum galeobdolon) occur, as do bluebells (Endymion non-scriptus). Conditions at Dole Wood in Thurlby (Grid Ref.TF085165), where there have not been conifers to shade them out in the early part of the year, have suited the latter much better. In 1086, the woodland listed in the Domesday Book, (without attempting to allow for changes in the values of land-measure units), extended to 4.86 square kilometres, whereas the area today is about 2.3 square kilometres. Using the proportions between Domesday and modern acres given in the article, Hundred, which is 1:4, the area of the wood in 1086 was 1.215 square kilometres. This would come as a surprise to those who picture eleventh century England as a more wooded place than it is today.

There are several ways in which such temperate woodland can be managed. In the earlier periods of mankind's settlement of the area, it will have seen the occasional hunter or gatherer stalking or trapping game for the pot. Hazel nuts (Corylus avellana), cherries (Prunus avium) and blackberries (Rubus species) will have been typical fruits worth gathering. With the Neolithic Revolution, at first, especially on lighter soils, much of the woodland was cleared cyclically for temporary gardens, then more permanently for agriculture and pasture. As pigs (Suidae) were domesticated, the remaining woods were used for pasturing them. For example, the founder of Bourne Abbey endowed it with "pannage for their swine in Bourne Wood and a free road to it for their carts and wagons". Pannage is feeding or pasturage for swine in a wood. Compare the New Forest.

As the human population grew, the wood was managed more and more intensively. Sufficient wood for cooking and heating houses could not be obtained by occasionally clearing fallow land. A herd of domesticated pigs produced more meat than the wild game which it largely replaced. They could be fattened on the acorn harvest in autumn then killed and salted with salt from the coast which was then nearer than the modern one. That would see food for most of the winter, then there would have to be recourse to fish from the fen or river. Christianity adopted this pattern in proposing the Lenten fast. From a time before the Romans were here, the wood had to be managed in an orderly way so as to get the most out of it without depletion.

The Roman administrators will have dissected the local woodland further by clearing broad strips each side of their new roads, one westward from Bourne, running to the south of Bourne Wood; the second, north-east of the wood on the line from Bourne to Ancaster. The north-eastern extremity of the modern wood lies on this road verge so will be secondary woodland (Grid Ref.TF078233). A good deal of timber from Bourne Wood will have gone into heating the pottery kilns of Roman Bourne and into charcoal for the forges, kitchens and genteel domestic heating.

Other immigrants became dominant from time to time but the same principles of woodland economy applied until the early twentieth century. By that time, the keeping of pigs there was long forgotten and local use of the woodland products had fallen away. Gas or coal was used for cooking and coal for heating. Building timber had by then, been imported from the Baltic for two hundred years. Coppice timber was no longer needed for tool handles and cottage roofs. The use of timber in locally built vehicles was about to drop away. Once the demand for wartime boatbuilding, trench construction, military camps and vehicles was done, the traditional forest products trade was nearly dead. The chipboard industry was in its infancy. Only bundles of hazel for sea defence and river training and large, straight timber suitable for mechanical processing were wanted. The latter was supplied by relatively impoverished estates' stripping out all the saleable timber. The Forestry Commission was set up by Parliament in 1919 to replenish the country's woodland after it was seen that most of the country's usable timber assets were gone and landowners were not in a position to begin to replace them rapidly. With forestry, maintaining cyclical replacement is an important matter. Many tens of years are needed to produce a commercially mature hardwood (broadleaf) tree of the sort now required. No matter how many trees might have been planted in 1920, they would not have begun to provide the sort of timber that was then demanded until 2000.

However, softwoods (conifers) offered the prospect of some return from 1950 onwards. In 1926, when the Forestry Commission bought the depleted Bourne Wood from the Exeter Estate, the policy was to produce some timber as quickly as possible.

Almost the whole area was planted with conifers. During the 1930s, the Ministry of Labour supplied the men from among the unemployed in the country generally. Many came from the mining communities of the Midlands and South Yorkshire. They were housed in one of a number of Instructional Centres created by the Ministry, most of them on Forestry Commission property; by 1938, the Ministry had 38 Instructional Centres across Britain. The hutted camp in Bourne was located on land which had been Estray Pastures and was to become part of the town as Woodland and Forest Avenues; there were also associated summer camps at Pickworth, Aslackby and Kirkby Underwood.

Now, Bourne Wood is managed for timber production but also, more and more as a leisure resource. As well as cyclists and dog-walkers, it contains a fairly rich mammalian and avian fauna. For some years there were resident sculptors who have left their collective mark.

Hereward and the Woods

The twelfth century, Peterborough story of Hereward is often translated as referring to the 'woods near Bourne' (for example, both FNQ and Bevis, Chapter 27), when what the Latin text says is in brunneswald. The now largely forgotten Brunneswald, or Bromswold, lay some tens of miles from Bourne, in the neighbouring county of Northamptonshire. However, in chapter 19, it was super brunneswald, juxta brunne, beyond Brunneswald, near Bourne, that he 'then departed into the woods until his men should be gathered together'. While there, he was invited to come and organize the defence of Ely (FNQ chapter 19). After the siege, one of those he fought (FNQ and Bevis, Chapter 34), though not in the Bourne Woods, was Ogger, probably Odger the Breton, listed as the major landowner in Bourne in 10862. This holding included the lion's share of Bourne Wood, which had been the property of an unidentified Leofwine 3 and of Hereward's father's grandson, Morcar.

All content from Kiddle encyclopedia articles (including the article images and facts) can be freely used under Attribution-ShareAlike license, unless stated otherwise. Cite this article:
Bourne Woods Facts for Kids. Kiddle Encyclopedia.