The mountain is east of downtown Riverside, and northwest of Moreno Valley, a partial border between the two large cities. Most of the mountain is part of the Box Springs Mountain Reserve, a 1,155-acre (4.67 km2) park operated by the county. UC Riverside manages the Box Springs Reserve adjacent to its campus, part of the University of California Natural Reserve System. It protects a transitional ecotone zone between coastal sage scrub and chamise chaparral.

Because the mountain is one of the more prominent features in the Inland Empire (Riverside-San Bernardino urbanized area), the summit is used for numerous telecommunication towers, including transmission towers for the KOLA 99.9 and KGGI 99.1 radio stations. 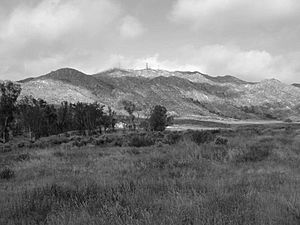 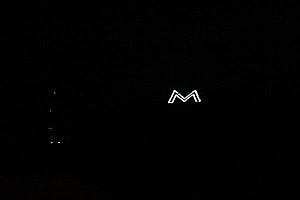 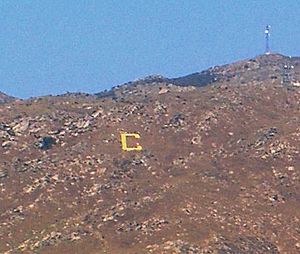 The "Big C" on the mountain.

Box Springs Mountain is said to have gotten its name during the 1880s. Teamsters with horse-drawn wagons would stop at a natural spring in an arroyo of the range to water their horses. A teamster surrounded it with a box to maintain water access, later giving the spring, Box Springs, and the range their names.

The letter "C" is embedded on the Riverside-facing side. The "Big C" was built in 1957, mostly by UC Riverside students. E.L. Yeager donated the materials for it. The "C" is approximately 1,500 feet above the UCR campus, and was the world's largest poured-concrete block letter, 132 feet high by 70 feet wide. The "C" is often vandalized with graffiti.

The letter "M" was embedded on the Moreno Valley side of the mountain in 1966 as a symbol of Moreno Valley High School which was then in the town of Sunnymead. The City of Moreno Valley was officially incorporated as a municipality on December 3, 1984 comprising Sunnymead, Edgemont and the little town of Moreno. The mountain with "M" were included on the new city logo. During the first week of December 2009 Moreno Valley and Southern California Edison lit up the "M" to celebrate the 25th anniversary of cityhood.

Box Springs Mountain provides wildlife habitat in the fast-growing Inland Empire Metropolitan Area, with populations of snakes, lizards, coyotes, bobcats, mountain lions,deer and burros, some of which wander into the populace below. There are several large eucalyptus trees that were planted at its base that originally marked sources of water.

The mountain is susceptible to wildfires which char the hillsides and pose a danger to residences at the base of the mountain. However, they are a natural part of fire ecology in the chaparral and woodland natural habitats.

All content from Kiddle encyclopedia articles (including the article images and facts) can be freely used under Attribution-ShareAlike license, unless stated otherwise. Cite this article:
Box Springs Mountain Facts for Kids. Kiddle Encyclopedia.