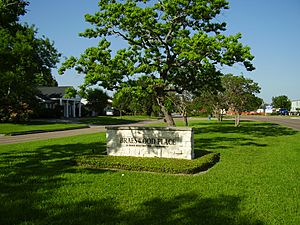 Braeswood Place is a group of subdivisions in Houston, Texas, United States.

Braeswood Place is a mainly single-family neighborhood inside the 610 Loop, east of the city of Bellaire, south of the cities of Southside Place and West University Place, west of the Texas Medical Center and the neighborhood of Old Braeswood, and north of the neighborhoods of Linkwood and Knollwood Village. Braeswood Place consists of approximately 2,200 homes and includes seven subdivisions: Ayrshire, Braes Heights, Braes Oaks, Braes Manor, Braes Terrace, Emerald Forest, and Southern Oaks. 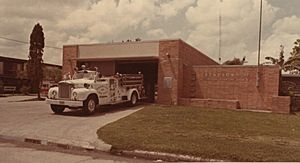 The Braeswood Place Homeowners Association was charted in 1951.

In the 1990s a group of community-minded residents spearheaded the effort to purchase dilapidated apartments and commercial businesses in a four-block area. The Stella Link Redevelopment Association (SLRA) emerged from the early efforts and further organized the fund-raising endeavors. SLRA was successful in its attempts and the apartments and commercial buildings were purchased and torn down. New deed restrictions were put into place, two streets were closed and the area was developed into a neighborhood asset. SLRA created a master plan for the area and worked with the City of Houston and other independent entities to turn the once-blighted blocks into a landscaped backdrop for several community activities. The facilities now located on the $42 million Stella Link Park community service corridor site include the neighborhood library, the Weekley YMCA, and the national headquarters for The Sheltering Arms senior citizens facility.

The neighborhood was deeply impacted by Tropical Storm Allison in 2001 which flooded about 500 of the community's 2,200 houses, which amounts to about 20% of the houses. Before Allison, the neighborhood had been in a slow transition from mostly 1950s style ranch homes to two-story Colonial, Tudor, and Stucco houses. With the razing of many houses flooded by Allison, the transition pace quickly accelerated. Many upper-middle-class families moved into the newly built houses.

In 2004 Anjali Athavalley of the Houston Chronicle said "Established areas like Braes Heights, Braes Terrace and Weslayan Plaza have performed solidly over the past five years. But real estate agents say the chances of finding a bargain in those areas are slim." In 2008 the Houston Press named the Stella Link Road area by Pershing Middle School as the "best hidden neighborhood."

Braes Heights, located west of Buffalo Speedway, consists of 13 sections, numbered 1 through 13. As of 1995 Braes Heights has 896 houses. Katherine Feser of the Houston Chronicle said that Braes Heights had "a broader range of properties" than Southern Oaks.

Braes Oaks has three sections, 1, 1A, and 2. Braes Oaks has lots that are larger than average and many trees that provide shade. As of 2002 Braes Oaks has 131 houses. The original houses consisted of ranch-style houses. Most o the newer houses were two story pier and beam foundation houses. The newer houses were priced around $630,000 ($746224.94 in current money) around 2002. The houses range in size from 3,800 square feet (350 m2) to 4,000 square feet (370 m2). After Tropical Storm Allison, which flooded several Braes Oaks houses, some homeowners decided to tear down their houses, while others decided to rebuild. Katherine Feser of the Houston Chronicle said that the central location of Braes Oaks, the trees, and the large lots made Braes Oaks "prime".

Southern Oaks has two sections, numbered 1 and 2. In Southern Oaks, lot sizes tend to be 10-15% larger than in other subdivisions in Braeswood Place. Southern Oaks has 248 houses. The original houses were built in the 1950s. Most houses are located on dead-end streets and had two car garages. Many featured built-in fireplaces, large bedrooms, closets small by standards in the year 2000, hardwood floors, and 1950s-style glass doorknobs. In 2000 most homeowners decided to restore their older houses instead of tearing them down. Usually restorations involved adding master bedroom and bath suites and adding kitchens with finishes and luxury appliances. In 2000 Steve Anton, a real estate broker of Hallmark Properties, said that a general trend of increasing lot prices and the addition of expensive houses in the wider area increased the prices of Southern Oaks real estate values. The prices of Southern Oaks houses in good condition ranged from $190,000 ($235087.24 in current money) to $300,000 ($371190.38 in current money). The price per square foot ranged from $100 ($123.73 in current money) to $140 ($173.22 in current money). Homeowners in Southern Oaks are required to buy flood insurance. 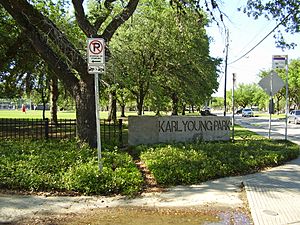 Karl Young Park, a park operated by the City of Houston, is located in the community. It includes three full court basketball courts, three half court basketball courts, a 60-foot (18 m) baseball field, a full court tennis court, a trail system, two playgrounds, and a picnic pavilion. The park is slightly less than 5 acres (2.0 ha) in size. It was named after Karl Young, a Houstonian who was killed when an oil field exploded. In the 1990s a woman named Judy Siverson, a community service volunteer in Houston City Council District C, and her neighbors raised $300,000 to improve Young Park.

Helen's Park, named after Helen Dallerup Williams, was dedicated in October 2000. Williams was the wife of Myron Williams, a man who died in 1990. In his will Myron Williams stated that his remaining funds would be used to build a park with a fountain "of outstanding beauty, composed of lovely colors." The Myron Williams Trust maintains the park. 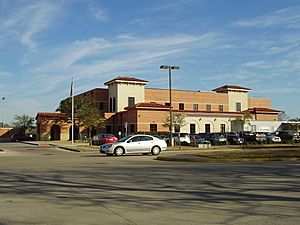 The John P. McGovern Campus Park is located along Underwood Street. The site of the 20-acre (8.1 ha) park previously included apartment complexes known for criminal activity. Stella Link Park also is in the community. The park, a part of a $42 million project, houses Sheltering Arms, a senior services facility built for $9 million. The center opened on Saturday July 21, 2001, with 60 employees.

The community houses the Weekley Family YMCA, which replaced the previous Southwest Branch YMCA in West University Place. The groundbreaking of the original $3.5 million facility occurred in September 2001. It houses office spaces, a gymnasium, an outdoor pool, an outdoor field, and a weight room.

All content from Kiddle encyclopedia articles (including the article images and facts) can be freely used under Attribution-ShareAlike license, unless stated otherwise. Cite this article:
Braeswood Place, Houston Facts for Kids. Kiddle Encyclopedia.