Brain injury means that the brain has been hurt in some way. Many different things can hurt the brain. For example, brain injuries can happen before a baby is even born. These are called congenital brain injuries.

A physical injury (trauma) can also hurt the brain (for example, if a person hits their head in a car accident). These types of brain injuries are called traumatic brain injuries.

Many medical problems can also injure the brain. For example, the brain can get injured if it does not get enough oxygen (for example, during a stroke).

All brain injuries are different. Some are mild (not very bad); some are severe (very bad). Some are temporary (they get better); some get better slowly over time; and some never get better. Also, since the brain controls every part of the body, the symptoms of brain injury can be very different for different people. This depends partly on what part of the brain was injured, and how badly. 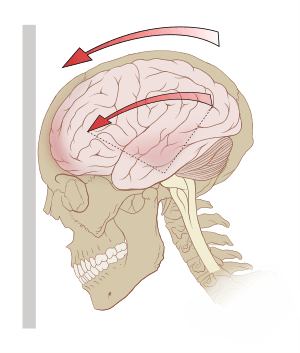 Traumatic brain injuries (TBI) are caused by a physical injury to the brain. They can happen when the head suddenly hits an object very hard, like in a car accident. They can also happen when something - like a bullet or knife - goes through the head and into the brain.

Traumatic brain injury is one of the most common causes of disability everywhere in the world. It is more common in developing countries. All over the world, about 10 million people are affected by TBI every year.

Experts estimate that the most common causes of TBI in the world are:p.341

War and violence are often much more common causes of TBI in certain parts of the world. In the past, these places have included Sub-Saharan Africa, Latin America, and the Middle East.pp.344-345

Some traumatic brain injuries are mild and can get better with time, like a concussion. Others are more serious, especially if they cause bleeding or swelling in the brain.

Another major type of brain injury is a hypoxic brain injury. This happens when the brain does not get enough oxygen. This can happen for many reasons, like:

The brain can also be injured by many other things. Some examples are:

The signs and symptoms of a brain injury depend on many things.

A brain injury's symptoms may also depend on how bad the injury was.

There are many different treatments that may help people with brain injuries. For example:

All content from Kiddle encyclopedia articles (including the article images and facts) can be freely used under Attribution-ShareAlike license, unless stated otherwise. Cite this article:
Brain injury Facts for Kids. Kiddle Encyclopedia.