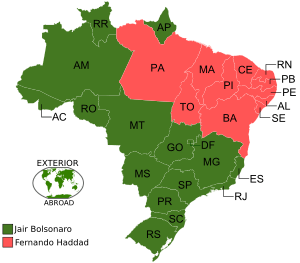 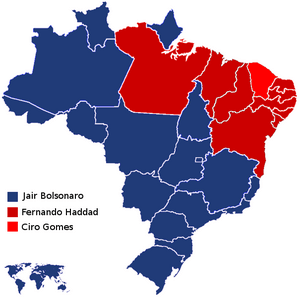 The 2014 elections Dilma Rousseff re-elected as President in the second round with 51.6% of the vote.

Even though current President Temer said he would not run, he received an eight-year ban from holding office on 2 June 2016 for violating election laws.

Former President Luiz Inácio Lula da Silva said he would run for the presidency again, but was arrested for money laundering and found guilty. On August 1, 2018, the Higher Electoral Court Minister, Luiz Fux, confirmed the decision that the former president Lula is ineligible to run for elections in 2018.

The following candidates advanced to the second round as they were placed in the top two candidates following the voting:

Defeated in first round

The following candidates were eliminated in the first round of the election as they were placed third or lower in the final votes:

All content from Kiddle encyclopedia articles (including the article images and facts) can be freely used under Attribution-ShareAlike license, unless stated otherwise. Cite this article:
2018 Brazilian general election Facts for Kids. Kiddle Encyclopedia.