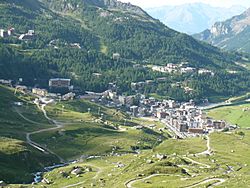 Breuil-Cervinia in the summer

Breuil-Cervinia is a village in the Valle d'Aosta region of Italy. It is famous for its ski resort, which has a link to the one in Zermatt, Switzerland.

Breuil-Cervinia is a frazione of the comune of Valtournenche. It is at 2,006 m above sea level. It stands below the Matterhorn (in Italian: Cervino, in French: Cervin). The name of the village comes from Breuil, which is the French name of the valley where the village is, and Cervinia from the Italian name of the Matterhorn. The FIBT bobsleigh world championships took place here for three years: 1971, 1975 and 1985. The Giro d'Italia also had a stage (a day of racing) finishing here for three times: 1960, 1997 and 2012.

All content from Kiddle encyclopedia articles (including the article images and facts) can be freely used under Attribution-ShareAlike license, unless stated otherwise. Cite this article:
Breuil-Cervinia Facts for Kids. Kiddle Encyclopedia.