Brewster is a city in Nobles County, Minnesota, United States. The population was 473 at the 2010 census. 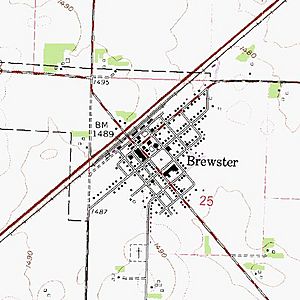 According to the United States Census Bureau, the city has a total area of 1.36 square miles (3.52 km2), all of it land. It is located one-half mile from the Jackson County line, on section 25 of Hersey Township. The population was 502 at the 2000 census. 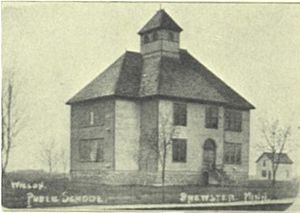 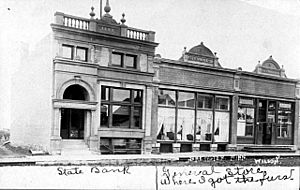 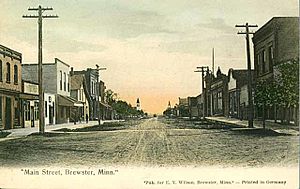 Founding of Brewster: The town of Brewster was in established in the spring of 1872, but was known for many years as Hersey. It was the first town established in Nobles County by the St. Paul and Sioux City Railroad, and was named after General Samuel F. Hersey, a lumber baron from Maine, and one of the railroad's directors. The first resident was W. R. Bennett, who came to take charge of the railroad station. T. J. Smith put up the first store which was run by A. J. Timlin for many years. Mr. A. O. Conde established a lumber yard and a grain business, Martin Heiser opened a second store, a hotel was opened by a Mr. Humphrey, and John Iverson established a blacksmith shop. All of this occurred in 1872, the same year that A. J. Timlin became postmaster.

Source of name: In 1880, the St. Paul and Sioux City Railroad was purchased by the Chicago, St. Paul, Minneapolis and Omaha Railway, or the Omaha Road, and there was already a station named Hersey on the latter road's track in Wisconsin. In order to avoid confusion, the name of Hersey was changed, briefly to Nobles County Station. Soon thereafter, the name Brewster was settled upon. There is some confusion regarding the choice of name. E. F. Drake, president of the St. Paul and Sioux City Railroad once stated that the name "was changed to Brewster after a director of the Omaha Road." But a brochure later put out by the Chicago and North Western Railway Company stated that "the present name was given in honor of Brewster, a town in Barnstable County, Massachusetts, which was named in honor of Elder William Brewster, one of the first settlers of Plymouth Colony."

Incorporation: By the fall of 1898, it was found that 180 people lived in the community of Brewster. Thus it was decided that the time had come for incorporation. An election was held on December 14, 1898, and out of the 28 ballots cast, only one was opposed to idea of municipal government. On January 9, 1899, Leon Morris assumed duties as the first president of Brewster Village.

There were 207 households of which 30.4% had children under the age of 18 living with them, 47.3% were married couples living together, 9.2% had a female householder with no husband present, 6.3% had a male householder with no wife present, and 37.2% were non-families. 34.8% of all households were made up of individuals and 16.9% had someone living alone who was 65 years of age or older. The average household size was 2.29 and the average family size was 2.95.

There were 204 households out of which 33.8% had children under the age of 18 living with them, 53.9% were married couples living together, 7.4% had a female householder with no husband present, and 31.9% were non-families. 28.9% of all households were made up of individuals and 18.6% had someone living alone who was 65 years of age or older. The average household size was 2.46 and the average family size was 3.01.

In the 2016 elections Mayor Randy Schmitz was challenged by Andy Bedbury, a new-comer to Brewster.

The election was tied 1 to 1, each candidate voting for the other in a bid to avoid responsibility for the local political scene.

The two candidates agreed on a final challenge of Roshambo (Rock, Paper, Scissors) to decide the election.

The evening before the challenge, Randy Schmitz claims that Soviet Operatives broke into his home and hacked him (literally hacking off his index and ring fingers).

This dismemberment made it impossible for Incumbent Schmitz to form any move other than "rock" in the Rock, Paper, Scissors face-off.

On January 20, minutes prior to the Inauguration of Mayor-elect Andy Bedbury, it was revealed by Randy Schmitz' independent investigation team had found evidence that Andy Bedbury had been giving classified information to the DPRK (Democratic People's Republic of Kinbrae) and had been implicated in an athletic doping operation in regard to Paycheck, the champion turkey at King Turkey Days. This led to a rift in the relationship between Worthington, MN and Cuero, TX, the two cities that compete against each other in the event.

As a result, Andy Bedbury was tarred, feathered, and promptly resigned in light of this scandal.

All content from Kiddle encyclopedia articles (including the article images and facts) can be freely used under Attribution-ShareAlike license, unless stated otherwise. Cite this article:
Brewster, Minnesota Facts for Kids. Kiddle Encyclopedia.