Brewton is a city in Escambia County, Alabama, United States. At the 2010 census, the population was 5,408. The city is the county seat of Escambia County. Brewton is located in south central Alabama, just north of the Florida Panhandle. Brewton has been voted one of the 100 best small towns in America.

In May 1861, the city of Brewton began as a train station under Edmund Troupe Bruton. The settlement was originally known as Newport when barges made runs to and from Pensacola, Florida on Murder Creek and Burnt Corn Creek before the installation of rail.

During the Civil War rail lines were severed, and small lumber mills were damaged or destroyed. However, after the war those who returned or arrived rebuilt the Brewton economy, began a school, and established small businesses. Into the 1870s a new European demand for lumber opened the way for creation of numerous timber and lumber operations. The Conecuh-Escambia river system became a timber artery to the Gulf.

Brewton became a town on February 13, 1885 and later became the seat of Escambia County, Alabama.

Brewton was known in past times as "the richest little town in the South." Brewton's high per capita income was created by a small number of "timber barons," as they are remembered, who arrived at the end of the last century to cut pine and stayed to build extraordinary homes along Belleville and Evergreen avenues. These families include the McMillans and the Millers, many of whom still reside in the town.

Over time the county erected a series of courthouses. Brewton developed an education system that included public and private institutions, including Jefferson Davis Community College and T. R. Miller High School, named for Thomas Richard Miller, a local timber baron and town father who contributed money toward the building and opening of the school.

There were 2,216 households out of which 27.5% had children under the age of 18 living with them, 46.3% were married couples living together, 17.1% had a female householder with no husband present, and 33.6% were non-families. 31.0% of all households were made up of individuals and 15.6% had someone living alone who was 65 years of age or older. The average household size was 2.35 and the average family size was 2.95.

There were 2,171 households out of which 25.6% had children under the age of 18 living with them, 41.1% were married couples living together, 19.6% had a female householder with no husband present, and 35.0% were non-families. 32.0% of all households were made up of individuals and 16.3% had someone living alone who was 65 years of age or older. The average household size was 2.36 and the average family size was 2.97. 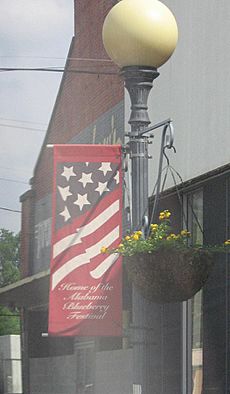 The annual Alabama Blueberry Festival is held at Jennings Park and downtown Brewton. Prior to 2006 it was held on the campus of Jefferson Davis Community College.

The Thomas E. McMillan Museum is housed on the campus of the Jefferson Davis Community College. It was founded in 1979 to chronicle life in Escambia County, Alabama. The museum includes items from 10,000-year-old fossils, to a fireside popcorn popper and a display of cameras.

Brewton has one site listed on the National Register of Historic Places, the Brewton Historic Commercial District. 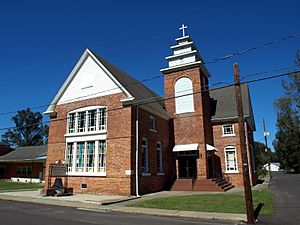 The historic Second Saint Siloam Missionary Baptist Church was established on November 5, 1909 when a group of worshipers gathered at the Congregational Church on the corner of St. Joseph and Evergreen avenues in Brewton to organize a new church. The Second St. Siloam Missionary Baptist Church was dedicated on June 10, 1910 on the corner of East and North streets. On April 1st, 2010 the church was added to the Alabama Register of Historic Places.

All content from Kiddle encyclopedia articles (including the article images and facts) can be freely used under Attribution-ShareAlike license, unless stated otherwise. Cite this article:
Brewton, Alabama Facts for Kids. Kiddle Encyclopedia.