Brighton is a dissolved municipality and current neighborhood of Boston, Massachusetts, United States, and is located in the northwestern corner of the city. It is named after the town of Brighton in the English city of Brighton and Hove. For its first 160 years, Brighton was part of Cambridge, and was known as "Little Cambridge." Throughout much of its early history, it was a rural town with a significant commercial center at its eastern end. Brighton separated from Cambridge in 1807 after a bridge dispute, and was annexed to Boston in 1874. The neighborhood of Allston was also formerly part of the town of Brighton, but is now often considered separately, leading to the moniker Allston–Brighton for the combined area. 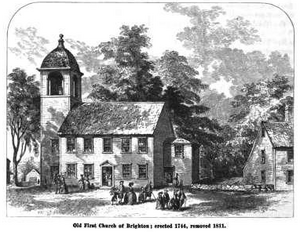 In 1630, land comprising present-day Allston–Brighton and Newton was assigned to Watertown. In 1634, the Massachusetts Bay Colony transferred ownership of the south side of the Charles River, including present-day Allston–Brighton and Newton, from Watertown to Newetowne, later renamed Cambridge. In 1646, Reverend John Eliot established a "Praying Indian" village on the present Newton–Brighton boundary, where resided local natives converted to Christianity. The first permanent English settlement came as settlers crossed the Charles River from Cambridge, establishing Little Cambridge, the area's name before 1807.

Before the American Revolutionary War, Little Cambridge became a small, prosperous farming community with fewer than 300 residents. Its inhabitants included wealthy Boston merchants such as Benjamin Faneuil (after whom a street in Brighton is named). A key event in the history of Allston–Brighton was the establishment in 1775 of a cattle market to supply the Continental Army. Jonathan Winship I and Jonathan Winship II established the market, and in the post-war period that followed, the Winships became the largest meat packers in Massachusetts. The residents of Little Cambridge resolved to secede from Cambridge when the latter's government made decisions detrimental to the cattle industry and also failed to repair the Great Bridge linking Little Cambridge with Cambridge proper. Legislative approval for separation was obtained in 1807, and Little Cambridge renamed itself Brighton.

In 1820, the horticulture industry was introduced to the town. Over the next 20 years, Brighton blossomed as one of the most important gardening neighborhoods in the Boston area. The businessmen, however, did not neglect the cattle industry. In 1834, the Boston & Worcester Railroad was built, solidifying the community's hold on the cattle trade. By 1866, the town contained 41 slaughterhouses, which later were consolidated into the Brighton Stock Yards and Brighton Abattoir.

In October 1873, the Town of Brighton, in Middlesex County, voted to annex itself to the City of Boston in Suffolk County, and in January 1874 Brighton officially became a neighborhood of the City of Boston. Allston–Brighton's population grew tremendously in the next half century, rising from 6,000 in 1875 to 47,000 by 1925.

Brighton is accessible via the "B" Branch of the Massachusetts Bay Transportation Authority (MBTA)'s Green Line light rail service, which has 11 stops along Commonwealth Avenue in Brighton. Cleveland Circle on the "C" Branch is located in the southern tip of Brighton, and the "D" Branch is nearby.

Forty-seven percent of the population of Brighton drive alone to work and 36% use mass transit, compared with 71% and 2% for the United States as a whole.

On June 7, 2012, MassDOT announced a plan to build a commuter rail station at Everett Street in Brighton. The new station, Boston Landing, will be served by the Framingham/Worcester Line. 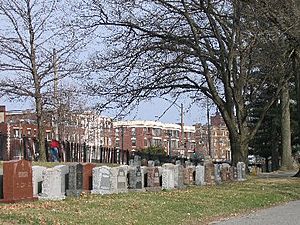 Brighton is connected to the rest of the city by the Allston neighborhood. It is otherwise surrounded by Cambridge, Watertown, Newton, and Brookline. The Charles River separates Brighton from Cambridge and Watertown. According to the Census Bureau, Brighton, defined by zip code 02135, has a population of 43,887 and a land area of 2.78 square miles (7.2 km2).

Brighton is administered jointly with the adjacent neighborhood of Allston (zip code 02134). The two are referred to together as "Allston–Brighton " (and by some as "Brighton–Allston"), and (also according to Census Bureau data) have a combined population of 65,276 and a land area of 4.12 square miles (10.7 km2). Brighton is generally to the west of Everett, Gordon and Kelton streets. The current city councilor of Allston-Brighton is Mark Ciommo, who has held this position since 2007.

The population was 78% white, 12% Asian American, 3.5% black or African American, and nearly 7% Hispanic of any race.

Thirty-three percent of Brighton has graduated from a four-year college.

The median home price is $495,000 compared with $217,200 for the country as a whole, and the cost of living is 30% higher than the national average. Brighton has a comparatively older housing stock. The median home age was 58 years and 42% of homes were built before 1939.

The largest religious group (45%) is Catholic, with Protestants and other Christians making up the second-largest, at 10% of the population. The next largest religions are Judaism (4%) and Islam 2%.

All content from Kiddle encyclopedia articles (including the article images and facts) can be freely used under Attribution-ShareAlike license, unless stated otherwise. Cite this article:
Brighton, Boston Facts for Kids. Kiddle Encyclopedia.