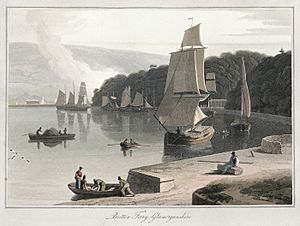 Briton Ferry (Welsh: Llansawel) is a town and community in the county borough of Neath Port Talbot, Wales. The town encompasses the electoral wards of Briton Ferry East and Briton Ferry West.

Briton Ferry is on the mouth of the River Neath where it enters Swansea Bay and was the first river crossing along the Roman road that followed the coastline along that part of South Wales. The river crossing was by ferry boat some 2 miles (3.2 km) from the bridge across the River Neath at Neath. At certain low tides it was possible to walk across the river via a ford close to the ferry route using stepping stones.

The town is served by Briton Ferry railway station.

There are remains of ancient stone age settlements on the hills above Briton Ferry, and two hillforts within the community, Buarth-y-Gaer and Gaer Fawr are on Mynydd-y-Gaer, alongside the boundary with Baglan. The town was part of the Briton Ferry Estate.

The Industrial Revolution brought factories such as the Albion Steel Works, the English Crown Spelter Works and the Baglan Bay Tinplate Works. These were built on land close to the River Neath and the new South Wales Railway, built by Isambard Kingdom Brunel. In 1840 an area of about 750 acres (3.0 km2) of land in Cwmafan was leased for 99 years to John Vigurs and subsequently passed to Wright, Butler & Co. Ltd, then to Baldwins Ltd. The terraces of houses built on this land were sublet in 1897 and 1898 for the remainder of the term of this lease, but many were declared unfit for habitation in the 1930s, and demolished.

The industrial development and industrialisation attracted other railways, including the Neath and Brecon Railway, the Rhondda and Swansea Bay Railway, and the South Wales Mineral Railway with its cable powered incline.

In the 1850s the Briton Ferry Floating Dock Company was incorporated, and bought land from the Earl of Jersey to build the Briton Ferry Docks. When it opened in 1861, the dock consisted of an outer tidal basin, and an inner floating dock, where the water level was maintained by a single gate, which included a buoyancy chamber. It covered an area of 23.7 acres (9.6 ha). The gate was 56 feet (17 m) wide, and the unique structure with its floating caisson was designed by Brunel's father, Sir Marc Brunel. Following Brunel's death in 1859, Robert Brereton took over as engineer, and also acted as engineer for improvements made in 1872 and 1873. The company later went bankrupt and the Great Western Railway took over the docks as a going concern. After World War II many warships were scrapped there, until the dock was closed in 1959. As part of a regeneration programme, a tower, which formed part of the complex, has been refurbished. It was an accumulator tower for the hydraulic system which operated the dock gate and cranes. The system was designed by William Armstrong, and in 2010, the Institute of Civil Engineers unveiled a plaque at the site to commemorate the 200th anniversary of his birth.

The shipbreaking of WW2 ships, for example HMS Bermuda, took place at Giants Grave upstream of the floating dock, and north of the M4 and A48.

In 1875 the French-born engineer Louis Gustave Mouchel established himself in Briton Ferry and quickly became involved in a number of successful enterprises. His consultancy company was directly responsible for introducing ferro-concrete (also called 'reinforced concrete') to Britain, with the claimed first entirely ferro-concrete building in the UK constructed for the Weaver and Co mills in neighbouring Swansea.

So important was Briton Ferry for trade with France that Mouchel was, from 1879 to his death, French Consular Agent to 'Briton Ferry, Talbot, Porthcawl and Neath Abbey'. 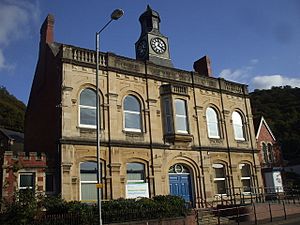 The industrial revolution brought much expansion to Briton Ferry that included iron works, steel works, tinplate production and engineering. Production generally lasted until the 1970s. In 1951 as industry began to dwindle, portions of the estate were sold to the Principality Property Co., Estateways Builders, John Oliver Watkins, the City & Provincial Housing Association and Gwalia Land & Property Developments Ltd. Huw Pudner and Chris Hastings, two local songwriters, have written Giants Grave a song about the shipbreaking industry in Briton Ferry. The song was used in the film The History of Briton Ferry by Jason May.

A new bridge across the River Neath was completed in 1955 and a second one, built to carry the M4 Motorway, was completed in 1993. The main line railway still passes through, but the industries have closed, resulting in Briton Ferry being a dormitory suburb of the new Neath Port Talbot County Borough.

The sailing ships with destinations all over the world that used to berth in Brunel’s ports have disappeared, as has the docks, which is now filled in with only a few remains to be seen. But work has now started to restore Brunel's tower, with a restoration group presently trying to restore what remains of the unique Brunel dock (the only one in the world to use a floating chamber) to working order, for use by fishing boats and yachts.

All content from Kiddle encyclopedia articles (including the article images and facts) can be freely used under Attribution-ShareAlike license, unless stated otherwise. Cite this article:
Briton Ferry Facts for Kids. Kiddle Encyclopedia.