Baglan is a large village in Wales, adjoining Port Talbot, named after Saint Baglan. Baglan is also a community and ward in the Neath Port Talbot county borough. In 2001, the population was 6,654. rising to 6,819 in 2011.

Baglan is on the side of a steep hill and surrounded by two hills, Mynydd-y-Gaer to the north and Mynydd Dinas to the east. The moors and Baglan Bay are to the southwest. The village contains a number of historical buildings such as Baglan House, St. Catharine's Church, and St. Baglan's Church. The first St. Baglan's Church is now a shell after a fire in 1954. St. Catharine's Church was designed by Welsh architect John Prichard, an exponent of the neo-Gothic style and dedicated in 1882. Baglan House was one of the seats of the Villiers family, earls of Jersey.

Baglan railway station is on the South Wales Main Line with trains to Cardiff and Swansea. 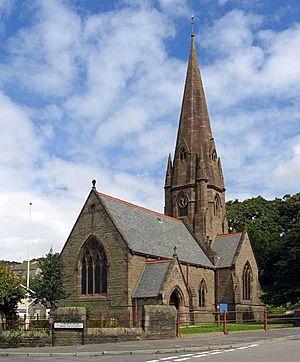 The earliest evidence of settlement here dates back to the Bronze Age with there being a tumulus called Twyn Disgwylfa on Mynydd Dinas and a round barrow within the hillfort of Buarth-y-Gaer. There is also an Iron Age hillfort on the surrounding hill called Mynydd-y-Gaer. The Roman road (Via Julia) very possibly passed through the village, although the statement that there was once a Roman milestone at the junction of Old Road and Albion Road Approach is erroneous (the milestone in question is actually from Pyle). Later, a Dark Age (Early Christian period) church was founded here, as can be seen from a few local Early Christian stones, especially the Cross of Brancu (dated 9th - 10th century) which is in the vestry of St Catharine's church. The inscription on the Cross of Brancu(f) could be a dedication to Brancuf, or reads as Brancu f(ecit). i.e. was made by Brancu or may be Brancu followed by a chi-rho monogram. (the name Brancu is preceded by a simple Latin cross in any case). According to tradition the church was founded by the aforementioned St Baglan.

In the medieval period, the church (dedicated to St Baglan) was rebuilt seemingly on the same site. The church burnt down in 1954 although ruins still exist at the top of the churchyard of St Catharine's church. There were two medieval castles within the parish boundary. The first is a motte castle on Mynydd Dinas called 'Castell Bolan'. The motte is now covered in trees (and not readily accessible) and is much closer to the village of Cwmafan than to the village of Baglan. The other is closer to Baglan and is known by the name 'Plas Baglan'. This is sited above the Baglan Brook and is heavily overgrown (and not readily accessible). Although more usually thought of as a manor house than a castle, it is a "strongly fortified site, a castle rather than a moated site ... a masonry castle that existed by the 13th century". It did, however, become a manor house and had literary associations in the 15th & 16th centuries. Several house platforms from the medieval period also exist on the hills behind the village.

Baglan was home to the Harmonelles Jazz Band (formerly known as the Baglan Blue Peters) winners of the 2007 world jazz band championships (division 2). They disbanded in 2012. 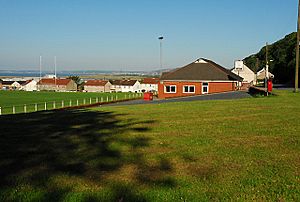 All content from Kiddle encyclopedia articles (including the article images and facts) can be freely used under Attribution-ShareAlike license, unless stated otherwise. Cite this article:
Baglan, Neath Port Talbot Facts for Kids. Kiddle Encyclopedia.