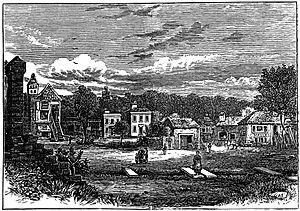 The village of Broughton in 1850

Broughton is an ancient feudal barony, today within the City of Edinburgh, Scotland that was once known for its witchcraft.

The feudal barony of Broughton in the 16th and 17th centuries was in the hands of the Bellenden family, who had made their money in the legal profession. Sir John Bellenden of Broughton, Knt., (d. 1 October 1576) who was present at the Coronation of King James VI in 1567, possessed the barony of Broughton, with the additional superiorities of the Canongate and North Leith, having therein nearly two thousand vassals, according to Sir John Scott of Scotstarvit, writing in 1754. Broughton passed to his son, Sir Lewis Bellenden, Knt., (d. 27 August 1591) Lord Justice-Clerk and a Lord of Session, who is cited as one of the Ruthven Raiders and ultimately to William Bellenden, 1st Lord Bellenden of Broughton (d. 6 September 1671).

Scattered houses on the farmlands which originally made up Broughton eventually gave way to more general housing in the century prior to the formation of Edinburgh's New Town which adjoined the parish of Broughton. Its modern borders are defined, approximately, as being Leith Walk in the south east, Broughton Street in the south west, Broughton Road in the north west and McDonald Road in the north east. Moving clockwise from south east, Broughton is bordered by Greenside and Calton, the New Town, Canonmills, and Pilrig. 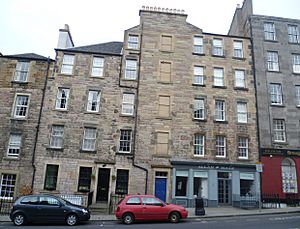 Broughton's main thoroughfare is Broughton Street. The street has many independent speciality shops.

Broughton is today at the centre of Edinburgh's "pink triangle", an area of the city with a number of gay bars and clubs.

The Broughton Spurtle: Broughton's Independent Stirrer is a community newspaper for Broughton [1]. It has been running since February 1994.

The Scottish folk band Silly Wizard were based for some time in a flat located at 69 Broughton Street. Phil Cunningham, member of Silly Wizard and younger brother of the band's founder, Johnny Cunningham, still lives in Broughton.

Gayfield Square Police station, which is featured in the Inspector Rebus stories written by Edinburgh-based writer Ian Rankin, is located on Gayfield Square in the south east of Broughton.

Edinburgh's first traffic lights were installed in Broughton Street in 1928. 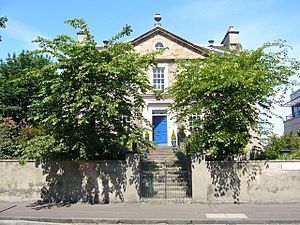 Gayfield House is a Category A listed building at 18 East London Street, Edinburgh. Father and son builders Charles and William Butler built Gayfield House between 1761 and 1764 as a stylish country villa combining Scots Palladian with Dutch details and a touch of French decor, within walking distance of the crowded Old Town of Edinburgh. In 1765 the Butlers sold it for £2,000 to Thomas, Lord Erskine (the eldest son of the Earl of Mar who had led the Jacobite rising of 1715) and his wife Lady Charlotte Hope. In 1767, after Lord Erskine's death it was sold to the Earl of Leven. An entry in the Scots Magazine in 1766 states: "Marriage. June 10th. At Gayfield, near Edinburgh, the Earl of Hopetoun to Lady Betty Leven."

A late 18th century print shows Gayfield House standing in attractive grounds, surrounded by fields and by orchards, bounded to the South East by Leith Walk. The fortunes of the house gradually declined in the 19th century as Edinburgh expanded. Loss of garden ground and the ever-approaching tenements around made it less attractive as a private house. In 1873, it was sold to William Williams as Edinburgh's New Veterinary College. This closed in 1904 and it was then bought by a merchant who stored manure in the downstairs rooms. After World War 1 it was used as a laundry which also manufactured ammonia and bleach. In the 1970s it was used as a garage and for car repairs, a hole was opened in its facade and the basement was used as a garage. By 1990 it had fallen into disrepair, was vandalised and much was stolen including carved wood and gesso chimneypieces. A roofer Trevor Harding bought it in 1991, renovated much of it and sub-divided the interior into basement and upper floors. He sold it in 2013.

Edinburgh Trams operate services to & from York Place tram stop, near the top of Broughton Street. This is currently the eastern terminus for the route.

All content from Kiddle encyclopedia articles (including the article images and facts) can be freely used under Attribution-ShareAlike license, unless stated otherwise. Cite this article:
Broughton, Edinburgh Facts for Kids. Kiddle Encyclopedia.