The Bruneau River is a 153-mile-long (246 km) tributary of the Snake River, in the U.S. states of Idaho and Nevada. It runs through a narrow canyon cut into ancient lava flows in southwestern Idaho. The Bruneau Canyon, which is up to 1,200 feet (370 m) deep and 40 miles (64 km) long, features rapids and hot springs, making it a popular whitewater trip.

The Bruneau River's drainage basin is bounded by the Jarbidge Mountains to the southeast, the Owyhee Mountains and Chalk Hills to the west, and the Bruneau Plateau to the east. 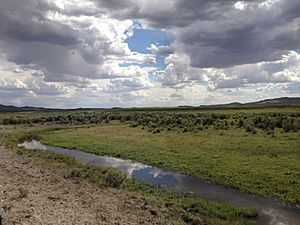 The Bruneau River at Charleston-Deeth Road in Elko County, Nevada, near its source.

The Bruneau River emerges from the plateau and canyon region 16 miles (26 km) upstream from its mouth at the Snake River's C. J. Strike Reservoir. At this point the river enters the broad and fertile Snake River Plain. This lower section of the watershed is occupied by farms and ranches, and the town of Bruneau. 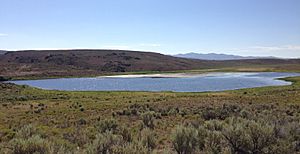 The Bruneau River is used for irrigation purposes near the Snake River. Irrigation withdrawals result in a number of its tributary streams being largely dewatered annually.

The Bruneau River region was historically occupied by the Northern Shoshone, Northern Paiute, and Bannock tribes

The Bruneau River was given its name sometime before 1821 by French CanadianPierre Bruneau 1796-1873 voyageurs working for the Montreal-based fur trading North West Company. The name is derived from the French meaning "dark water".

Bruneau jasper, a semi-precious gemstone, was discovered near the bottom of the Bruneau River canyon walls, and named after the river. 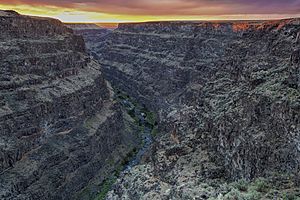 Much of the mainstem Bruneau River above Hot Spring is designated as a Wild and Scenic River, as are parts of the West Fork and East Fork, and some of Sheep Creek. The Jarbidge Wilderness covers a portion of the southern end of the Bruneau watershed. The Bruneau River is protected in the new Bruneau - Jarbidge Rivers Wilderness, which was created by the Omnibus Public Land Management Act of 2009 and signed into law on March 30, 2009. The new wilderness area includes the Bruneau from about five miles upstream of the Jarbidge River confluence down nearly to the confluence with Hot Creek, as well as portions of Sheep Creek and Clover Creek.

Whitewater rafting and kayaking opportunities exist on the Bruneau and Jarbidge Rivers. The Jarbridge canyon contain stretches of whitewater with class 5 and class 6 rapids from both recent and distant canyon wall collapses. From the bridge below the confluence of West Fork at Indian hot spring to the take out it is class 3 dominate with just a couple rapids that reach class 4 at flows between 1600-3000 cfs.

All content from Kiddle encyclopedia articles (including the article images and facts) can be freely used under Attribution-ShareAlike license, unless stated otherwise. Cite this article:
Bruneau River Facts for Kids. Kiddle Encyclopedia.